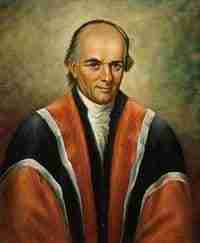 Moore was born in New Hanover County, North Carolina. Moore’s father, Maurice, preceded him in the practice of law and served as a colonial judge in North Carolina. Alfred was sent to Boston to complete his education, but he returned to North Carolina and read law as an apprentice to his father before being admitted to the bar at the age of twenty.

In 1775 the American Revolutionary War broke out and Alfred served as a captain in the First Regiment, North Carolina Line, of which his uncle, James Moore, was colonel, and took part in the defense of Charleston, S.C. in June 1776. He resigned in 1777, but served in the militia against Cornwallis after the battle of Guilford Court House. The war was costly to the Moore family. British troops captured the Moore plantation and burned the family home, and Alfred’s father, brother, and an uncle were among those who served and died.

At the end of the war Moore was elected to the North Carolina General Assembly, which eventually elected him to serve as Attorney General; a position he held from 1782 to 1791. As Attorney General in 1787 he argued the State’s case in Bayard v. Singleton [I NC (Mart) 5], which as decided (against the State) became an important early instance of the application of judicial review. Moore was an ardent Federalist favoring a strong national government and he took a leading role in securing North Carolina’s ratification of the United States Constitution after the state had initially rejected it in 1788. After North Carolina’s admission to the Union as the 12th state, Moore worked as a lawyer, was active in political affairs, and served as a judge of the superior court in 1798 and 1799. He served in the North Carolina State legislature, but lost by a single vote in his run for the United States Senate.

Moore was nominated by PresidentJohn Adams to a seat vacated by James Iredell. Moore’s service was terminated on January 26, 1804, due to resignation.

In 1799, Associate Justice James Iredell died suddenly. On December 4, 1799, President John Adams responded to the vacancy by nominating Moore, who was then confirmed by the United States Senate on December 10, 1799, receiving his commission the same day. At 4 feet 5 inches tall he is the shortest justice ever to sit on the Supreme Court and, due to poor health, Moore’s contribution to the court was abbreviated. In his five years of service he wrote only one opinion, Bas v. Tingy, upholding a conclusion that France was an enemy in the undeclared Quasi-War of 1798–1799. Moore’s scant contribution led one Court observer to place him atop a list of the worst justices in the history of the Court.