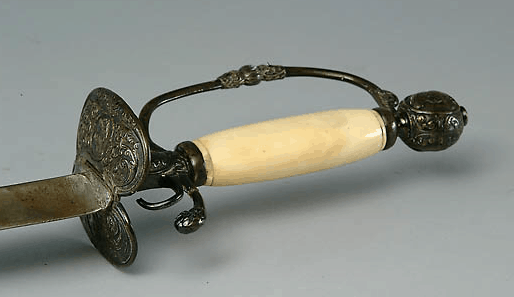 This small sword, made of steel and ivory, and measuring around 33.5″, was carried in the American Revolution by Captain John Paul Schott.  Schott was an officer in the Prussian army prior to the War.  He resigned his commission and came to America in 1775.  After helping, on his own accord, to procure needed supplies for the Continental Army, he was granted a commission as an officer in the Continental Army.  He would command both artillery and infantry units during his tenure.  For source and more details, click here, and here.