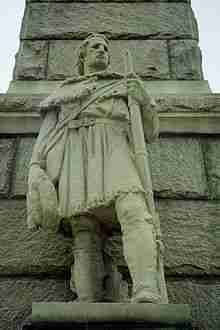 Andrew Lewis (October 9, 1720 – September 26, 1782) was an American pioneer, surveyor, and soldier from Virginia. He served as a colonel of militia during the French and Indian War, and as a brigadier general in the American Revolutionary War. He is most famous for his 1774 victory in the Battle of Point Pleasant in Dunmore’s War.

Lewis was born in County Donegal, Ireland to John Lewis and Margaret Lynn. In 1732 John Lewis had fled to America after killing his landlord in an altercation. He brought his family to Virginia, including his sons Andrew and Thomas. The family were among the first settlers in western Augusta County. Andrew Lewis received a basic education and learned the skills of a surveyor.

The French and Indian War brought conflict to the Virginia frontier. The militia was more formally organized, and Lewis became a captain in George Washington’s regiment. He was at Fort Necessity when Washington was forced to surrender to the French in 1754.

Washington’s proposal for a series of frontier fortifications was approved, and Lewis was promoted to major to oversee the region along the Greenbrier River. On February 18, 1756, the Big Sandy expedition, commanded Lewis left Fort Frederick with a mixed force of militiamen Cherokees to raid the Shawnee towns along the Big Sandy and Ohio rivers in retaliation for Shawnee attacks. He was engaged in several expeditions against both Indian settlements and French outposts. As part of the Forbes Expedition, he joined in Major James Grant’s attack on Fort Duquesne, and was captured in September 1758. Lewis was taken to Quebec and held as a prisoner until his release late in 1759.

When relative peace returned, Lewis entered politics. When Botetourt County was formed in 1769 he was elected to the House of Burgesses. He was a member from 1770 to 1780, though the American Revolution prevented him from attending in the later years.

The Proclamation of 1763 officially restricted Virginia’s western expansion, but Lewis continued his hunting and exploration trips into what later would become West Virginia. In 1774, Dunmore’s War broke out against the Shawnees. Governor Dunmore led a force from Fort Pitt into the Ohio Country. Lewis, now promoted to colonel, led a second force by the southern route.

Lewis was attacked by the Shawnee Chief Cornstalk when he was camped at the Ohio River crossing at Point Pleasant. His victory in the Battle of Point Pleasant on October 10, 1774, secured his military reputation.

When the American Revolution began, Governor Dunmore prorogued the Burgesses. The Whigs (soon to become American rebels) formed a provisional congress. Both Andrew Lewis and his brother Thomas were delegates. The Continental Congress created a Continental Army in 1775, and George Washington asked that Lewis be made a brigadier general. However, the Continental Congress had decided there should be only one general from each state, and Virginia’s position had already gone to Charles Lee.

In March 1776, Lewis was appointed a Brigadier General in the Continental Army. He oversaw the defense of Virginia and raised men for the Continental Army. Governor Dunmore still launched attacks along the coast, and the Committee of Safety called on Lewis to stop them. On July 9, 1776 he led Virginia’s forces to capture Dunmore’s last stronghold, a fortified position on Gwyn’s Island in the Chesapeake Bay. Lord Dunmore escaped by sea to sail to the Caribbean, never to return.

On April 15, 1777, Lewis resigned his commission because of poor health. However, there is reason to believe that he resigned for different reasons. There was malcontent for Lewis among his men and the army as a whole. Lt. Thomas Townes, present at Gwynn’s Island, wrote, “Lewis who after the enemy (Lord Dunmore)were vanquished proved a traitor & suffered them to escape”. They perceived Lewis as letting Dunmore flee Gwynn’s Island, an act they considered insufferable.

When promotions were announced for Major General in early 1777, Lewis was bypassed. Lewis made known his desire to resign for the disgrace and George Washington, in need of every able officer, wrote to him: “I was much disappointed at not perceiving your name in the list of major-generals lately made by Congress, and most sincerely wish that the neglect may not induce you to abandon the service.1 Let me beseech you to reflect, that the Period is now arrived, when our most vigorous exertions are wanted”.

Lewis replied, “In my last I intimated to your Excellency the impossibility of my remaining in a disagreeable situation in the army. My being superseded must be viewed as an implicit impeachment of my character. I therefore requested a court of inquiry into my conduct. I believe the time is now at hand, when I can leave this department without any damage to the public interest. When that is the case, I will wait on your Excellency, not doubting my request will be granted, and that I shall be able to acquit myself of every charge, which malice or envy can bring against me.” March 17, 1777

He remained active in the Burgesses, and in 1780, Governor Thomas Jefferson appointed him to the Council. The following year, Lewis fell ill while returning home from a council meeting; he died of a fever in Bedford County on September 26. He was buried in the family plot at his home. In 1887 General Lewis’ remains were re-interred in the East Hill Cemetery at Salem, Virginia.

Lewisburg, West Virginia, is named after Andrew Lewis. His statue is among those honoring Virginia patriots (including Thomas Jefferson, Patrick Henry, George Mason, Thomas Nelson, and John Marshall) on Richmond’s Washington Monument in Capitol Square. A memorial at the Salem Civic Center in Salem, Virginia, features a statue of Lewis next to a cannon. Andrew Lewis High School, now Andrew Lewis Middle School, opened in 1931 in Salem. Some residents petitioned unsuccessfully for the new high school in Salem to bear the name Andrew Lewis, but it opened in 1977 as Salem High School. On March 13, 2001, the General Assembly of Virginia designated the portion of Interstate 81 that traverses Rockbridge, Botetourt, and Roanoke Counties, and the city of Salem as the “Andrew Lewis Memorial Highway.” The General Andrew Lewis Scout Reservation in Ona, West Virginia (near Huntington) is operated by the Tri-State Area Council of the Boy Scouts of America.