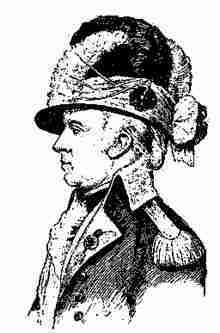 White received his education under the immediate direction of his father. At the age of twenty-five, his time was employed in study and in assisting his father in the management of his large estates. In October 1775, he obtained a commission as major and aide-de-camp to General George Washington.

On February 9, 1776, White was commissioned by the Continental Congress as the lieutenant colonel of the 3rd New Jersey Regiment. He was actively engaged in the service in the North until 1780, being successively appointed Lieutenant Colonel of the 4th Continental Light Dragoons in the Continental army, February 13, 1777, lieutenant colonel commandant of the 1st Continental Light Dragoons, December 10, 1779, and colonel, February 16, 1780. At that time, he was ordered by General Washington to take command of all the cavalry in the southern army, and, upon his own personal credit, equipped two regiments with which to operate against Lord Cornwallis in South Carolina.

On May 6, 1780, with the remnant of Major Benjamin Huger’s cavalry, he crossed the Santee River and captured a small party of British, but while waiting at Lanneau’s Ferry to recross the river, he was surprised and defeated by Col. Banastre Tarleton. White and many of his troops were taken prisoner. In 1781 he was ordered to join the army under Lafayette in Virginia, and on his march to that state had several successful encounters with Colonel Tarleton.

White was present with General Anthony Wayne in the movement before Savannah on May 21, 1782; and, on the evacuation of that place, returned to Charleston, South Carolina, where he became security for the debts of the officers and men of his regiments, who were in want of almost all the necessaries of life. These debts he was subsequently obliged to pay at enormous sacrifices of his own property, and, on returning to the North at the close of the war, his financial ruin was completed by entering into speculation at the persuasion of military friends.

In 1793 White moved from New York, where he had resided for about ten years, back to New Brunswick, New Jersey. In 1794 he was appointed by President Washington as a brigadier general of cavalry in the expedition against the insurgents of the Whiskey Rebellion, serving under General Henry Lee.

He died on February 10, 1803, at age 52, and was buried at Christ Church Episcopal Churchyard in New Brunswick, New Jersey.