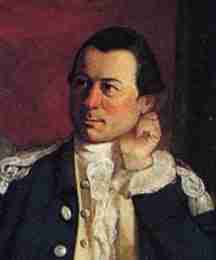 Bulloch was born and educated in Charleston, South Carolina, the son of James Bulloch and Jean Stobo Bulloch. He began to practice law in South Carolina and was commissioned as a lieutenant in the South Carolina militia. His family moved to Georgia in 1758, and Bulloch moved to Savannah, Georgia, in 1764. He was elected to the Commons House of Assembly of Georgia in 1768.

Bulloch would have been a signer of the Declaration of Independence, but decided to return to Georgia to aid the revolution there. In 1776, he fought under the command of Colonel Lachlan McIntosh in the Battle of the Rice Boats and the Battle of Tybee Island. On June 20, 1776, he was chosen to be the first President and Commander-in-Chief of Georgia under the state’s temporary republican government. When he signed the state constitution on February 20, 1777, his position transferred from president to governor of Georgia. He was thus Georgia’s first chief executive under a proper constitutional government, but the third chief executive in all, following the brief tenures of presidents William Ewen and George Walton.

Bulloch died in Savannah while preparing to defend against the British invasion of Georgia in 1777. There is some speculation that he was poisoned, though this has never been proven. His death was a severe blow, as his was the only leadership that united the Whig factions in the troubled young state. He is buried in Savannah’s Colonial Park Cemetery.