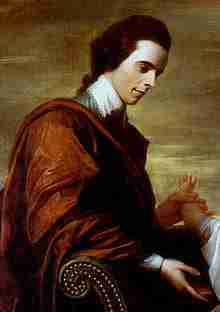 Arthur Middleton (June 26, 1742 – January 1, 1787), of Charleston, South Carolina, was a signer of the United States Declaration of Independence.

His parents were Henry Middleton and Mary Baker Williams, both of English descent. He was educated in Britain, at Harrow School, Westminster School, and Trinity Hall, Cambridge. He studied law at the Middle Temple and traveled extensively in Europe where his taste in literature, music, and art was developed and refined. In 1764, Arthur and his bride Mary Izard settled at Middleton Place. (His wife, Mary Izard, daughter of Walter Izard, Esq., was a cousin of South Carolina Congressman Ralph Izard; likewise a son of Congressman Izard was married to a niece of Arthur Middleton, and another son married Arthur’s daughter Emma).

Keenly interested in Carolina politics, Arthur Middleton was a more radical thinker than his father, Henry Middleton. He was a leader of the American Party in Carolina and one of the boldest members of the Council of Safety and its Secret Committee. In 1776, Arthur was elected to succeed his father in the Continental Congress and subsequently was a signer of the United States Declaration of Independence. Also in 1776, he and William Henry Drayton designed the Great Seal of South Carolina. Despite the time he spent in England, his attitude toward Loyalists was said to be ruthless.

During the American Revolutionary War, Arthur served in the defense of Charleston. After the city’s fall to the British in 1780, he was sent as a prisoner of war to St. Augustine, Florida (along with Edward Rutledge), until exchanged in July the following year.

Arthur died on January 1, 1787 at the age of 44 and was buried in the family tomb in the Gardens at Middleton Place. The death notice from the State Gazette of South-Carolina (SC), Jan. 4, 1787, described him as a “tender husband and parent, humane master, steady unshaken patriot, the gentleman, and the scholar.”

The plantation then passed to Henry, his eldest son, later Governor of South Carolina, U.S. Representative and Minister to Russia.

The United States Navy ship, USS Arthur Middleton (AP-55/APA-25), was named for him.

His sister, Susannah Middleton, was the great-great-grandmother of Baldur von Schirach, onetime leader of the Hitler Youth and later Governor (“Gauleiter” or “Reichsstatthalter”) of the Reichsgau Vienna, who was convicted of “crimes against humanity” at the Nuremberg Trials, through Baldur Von Schirach’s mother Emma Middleton Lynah Tillou (1872–1944). He was also an ancestor of actor Charles B. Middleton, who played Ming the Merciless in the Flash Gordon movies of the 1930s.