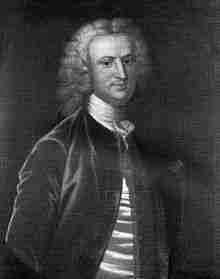 Benedict Swingate Calvert (ca. 1730-1732 – January 9, 1788) was a planter, politician and a Loyalist in Maryland during the American Revolution. He was the son of Charles Calvert, 5th Baron Baltimore, the third Proprietor Governor of Maryland (1699–1751), and may have been the grandson of King George I of Great Britain. His mother’s identity is not known, though one source suggests Melusina von der Schulenburg, Countess of Walsingham. As he was illegitimate, he was not able to inherit his father’s title or estates, which passed instead to his half brother Frederick Calvert, 6th Baron Baltimore (1731–1771). Benedict Calvert spent most of his life as a politician and planter in Maryland, though Frederick, by contrast, never visited the colony. Calvert became wealthy through proprietarial patronage and became an important colonial official, but he would lose his offices and his political power, though not his land and wealth, during the American Revolution.

Calvert was born Benedict Swinket in England in around 1730-32, the illegitimate son of Charles Calvert, 5th Baron Baltimore, proprietary governor of the Province of Maryland. His mother’s identity is not clear but H. S. Lee Washington, writing in the New England Historic Genealogical Society Register in July 1950, suggests that she was Melusina von der Schulenburg, Countess of Walsingham. Melusina was the daughter of George I of England and his mistress, Melusine von der Schulenburg, Duchess of Kendal.

Whatever the truth of this, it seems likely that Calvert’s mother was a person of some consequence. According to a letter of Benedict’s daughter-in-law Rosalie Stier Calvert dated 10 June 1814, his mother had been a woman “of the highest rank in England”.

In 1742, aged about twelve years, the young Benedict was sent to the Calverts’ proprietary colony of Maryland, which in the mid 18th century was still a sparsely settled, largely rural society. In 1730 the population of Annapolis was just 776. According to the letters of Rosalie Stier Calvert, Benedict was personally escorted to Annapolis on a frigate commanded by Admiral Edward Vernon and once there he was placed in the care of Dr George Steuart (1700–1784), an Edinburgh-trained physician and a political ally of the ruling Calvert family. Steuart provided the boy with a tutor, the Italian Onorio Razzolini, and Benedict grew up at Steuart’s house on Francis St in Annapolis, a short distance from the home of his second cousin, Elizabeth Calvert (1731–1788). Elizabeth was the daughter of Maryland Governor Captain Charles Calvert and his wife Rebecca Gerard, both of whom died young, leaving Elizabeth a wealthy heiress.

Through his family connections Calvert was able to benefit from considerable proprietarial patronage, at least until the American Revolution in 1776 ended proprietarial rule in Maryland. In 1745, aged around 15 years, he was appointed by his father the Patuxent district customs collector and naval officer.

Benedict Calvert would never return to England; nor would he meet his father again. Some time before his death in 1751, Lord Baltimore wrote to his son, offering advice on marriage:

> “Pray do not think of Marrying until you hear from me having some things to Propose for you, much for your advantage, and believe me I will never force Your Inclination, Only Propose what I think will make you most Happy, Afterwards Leave it to Your own Determination.”

On April 21, 1748 Benedict and his cousin Elizabeth were married in St Ann’s Church by the Reverend John Gordon. The couple, aged 18 and 17 years respectively, moved into a house at State Circle, Annapolis.

The marriage was announced in the Maryland Gazette on April 27, 1748:

Despite the loss of his father’s bequest, Calvert’s career progressed steadily. In 1755 he became a Judge of the Land Office, sitting alongside his former guardian Dr. George H. Steuart. He was also an Annapolis councilman.

In 1769 his half-sister Caroline Calvert married Robert Eden, who in the same year succeeded Governor Horatio Sharpe as Governor of Maryland. Eden and Calvert shared a love of horse racing and Benedict Swingate Calvert would soon find himself appointed to the Governor’s Council.

In 1751 Calvert inherited a {convert|4000|acre|km2|adj=on} plantation known as Mount Airy, originally a hunting lodge for his great-grandfather Charles Calvert, 3rd Baron Baltimore, near Upper Marlboro in Prince George’s County, Maryland, where he grew tobacco. Mount Airy was most likely a gift from his father, Lord Baltimore, who had ensured that Calvert would be provided with lands and revenues. Calvert began construction on the house at Mount Airy in 1751, expanding it considerably, to create the house which still survives today. Building continued in spite of a fire, rumored to be arson, in 1752.

By the 1770s Benedict Swingate Calvert controlled a large and profitable estate of around {convert|4000|acre|km2}, with upwards of 150 slaves. He was also an enthusiastic horse breeder, training thoroughbreds and running them in competitions in Maryland and Virginia.

According to the writer Abbe Robin, who travelled through Maryland during the Revolutionary War, men of Calvert’s class and status enjoyed considerable wealth and prosperity:

> “[Maryland houses] are large and spacious habitations, widely separated, composed of a number of buildings and surrounded by plantations extending farther than the eye can reach, cultivated…by unhappy black men whom European avarice brings hither…Their furniture is of the most costly wood, and rarest marbles, enriched by skilful and artistic work. Their elegant and light carriages are drawn by finely bred horses, and driven by richly apparelled slaves.”

In 1774, Calvert’s daughter Eleanor Calvert (1758–1811), married John Parke Custis, son of Martha Washington and the stepson of George Washington. Washington himself did not approve of the match owing to the couple’s youth, but eventually gave his consent, and was present at the wedding celebrations, which took place at Mount Airy.

As a member of the Maryland political establishment, Calvert was a Loyalist, and he soon found himself on the losing side of the Revolutionary War, the consequences of which would effectively end his political career. The Annapolis Convention of 1774 to 1776 would see the old Maryland elite overthrown, and Calvert, Eden and Steuart would all lose their political power. On May 13, 1777 he was forced to resign his position as Judge of the Land Office, and, as the conflict grew, Calvert became fearful of his family’s safety, writing in late 1777 that his family “has been made so uneasy by these frequent outrages” that he wished to “remove my family and property where I can get protection”.

Calvert did not leave Maryland, nor did he involve himself in the fighting, even though many other Maryland Loyalists went on to form a Maryland Loyalists Battalion. On occasion Calvert supplied the Continental Army with food and provisions.

In spite of the war, on June 15, 1780 Calvert’s daughter Elizabeth was married to Charles Steuart, son of Calvert’s benefactor George H. Steuart, at Mount Airy.

After the war’s end, Calvert had to pay triple taxes as did other Loyalists, but he was never forced to sign the loyalty oath and his lands and property remained unconfiscated.

Calvert’s Loyalism does not appear to have affected his cordial relations with the leader of the Revolution, George Washington. Most likely this was because of the marriage in 1774 of Washington’s stepson to Calvert’s daughter. In 1783, after the war was over, Washington stayed with the Calverts at their Mount Airy plantation, shortly after resigning his commission in Annapolis on December 23. Because Calvert was a known Loyalist, the visit drew much criticism from Washington’s political enemies.

Benedict and Elizabeth Calvert had thirteen children, of who many died in childhood or infancy:

Benedict Swingate Calvert died at Mount Airy on January 9, 1788. He was buried beneath the chancel of the church of St Thomas in Croom, Prince George’s County, Maryland, a church which Calvert had helped to found and maintain.

Calvert’s descendants continued to live at the Mount Airy plantation house until the early 20th century. In 1973, it was acquired by the State of Maryland and became Rosaryville State Park.

The Calverts’ house at 58 State Circle, Annapolis, was the subject of an archeological dig in the l980s and early 1990s. The results of the dig, along with much other research, were published in 1994 by Anne Elizabeth Yentsch in her book A Chesapeake Family and their Slaves, published by Cambridge University Press. The excavation of the Calvert House was financed by Historic Annapolis Inc, the National Endowment for the Humanities, and other institutions.