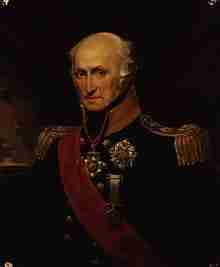 Admiral Sir Benjamin Hallowell Carew GCB, (born Benjamin Hallowell) (?1 January 1761 – 2 September 1834) was a senior officer in the Royal Navy. He was one of the select group of officers, referred to by Nelson as his “Band of Brothers”, who served with him at the Battle of the Nile.

Although he is often identified as Canadian, Hallowell’s place and exact date of birth have been the subject of dispute among researchers. He was probably born on 1 January 1761 in Boston, Massachusetts, where his British father, former naval captain Benjamin Hallowell (1723–1799), was Commissioner of the Board of Customs. His mother, Mary (Boylston) Hallowell, was the daughter of Thomas Boylston, and a first cousin of Susanna Boylston, the mother of the 2nd President of the United States, John Adams, and grandmother of the 6th President, John Quincy Adams. He was a brother of Ward Nicholas Boylston and a nephew of Governor Moses Gill.

His father’s job exposed Hallowell’s Loyalist family to attacks as American revolutionary sentiment grew. In August 1765 the Hallowell house in Roxbury was ransacked by a mob and the family relocated to Jamaica Plain and in September 1774 his father was pursued by a furious mob of 160 mounted men who had gathered to hear news of the resignation of other customs officials. The family left the country in March 1776, at the outbreak of the American Revolutionary War, and their estates were confiscated. They stayed for a short time in Halifax, Nova Scotia, then took a passage to England in July 1776.

Educated in the private schools of England, through his father’s connections with Admiral Samuel Hood, 1st Viscount Hood, Hallowell entered the Royal Navy at a slightly later age than was normal, receiving his promotion to lieutenant on 31 August 1781.

Benjamin Hallowell’s naval career spanned the American Revolutionary War, the French Revolutionary Wars and the Napoleonic Wars, and he took part in a number of important actions in all three. As a lieutenant in Admiral Lord Hood’s fleet, he saw action in the Battles of St. Kitts and the Saintes in 1782. He continued on active service after the end of the war and was promoted to the rank of commander in about 1791. Commissioned as a post-captain in August 1793, he and his ship took part in the evacuation following the Siege of Toulon in that year. He was involved in the Siege of Bastia under the command of Lord Hood, and then as a volunteer at the capture of Calvi, Corsica, in 1794 (in which Nelson lost the sight of his right eye); he was mentioned in despatches by Lord Hood for his part in this action, and was subsequently given command of {HMS|Lowestoffe|1761|6}.

By 1795 he was in command of HMS Courageux, and took part with her in the Battle of Hyères. He was not aboard in December 1796 when the vessel was wrecked after an incident in the Bay of Gibraltar during bad weather. Her mooring cable parted and she was driven within range of Spanish shore batteries; Hallowell, ashore to sit at a court-martial, was denied permission to rejoin the ship and take her to safety. She was subsequently wrecked off Monte Hacho in high winds during her officers’ attempts to move to a safer anchorage, with the loss of almost 500 lives.

Following her loss, Hallowell served as a volunteer aboard {HMS|Victory} during the Battle of Cape St. Vincent (1797). Admiral Sir John Jervis commended Hallowell to the Admiralty by for his actions during the battle. Jervis, a stern and imposing figure, informed of the superior odds facing him, he expressed determination to attack no matter how strong the opposition; Hallowell, standing with Jervis on the deck of Victory, reportedly expressed loud approbation and thumped his commander-in-chief on the back in a startling display of familiarity. Subsequently, Hallowell received command of {HMS|Lively|1794|6}.

Hallowell is probably best known as the man who made Nelson a present of what would become his own coffin, after the Battle of the Nile in August 1798. Hallowell commanded {HMS|Swiftsure|1787|6}, a 74-gun ship of the line, during the battle. Swiftsure engaged the French flagship L’Orient at close quarters and played a major role in her destruction. Some time later Hallowell sent Nelson a coffin Hallowell had ordered to be made from a salvaged piece of L’Orient{‘}s mainmast, with an accompanying note: {Quote|Sir, I have taken the liberty of presenting you a coffin made from the main mast of L’Orient, that when you have finished your military career in this world you may be buried in one of your trophies. But that that period may be far distant is the earnest wish of your sincere friend, Benjamin Hallowell|”The Life of Horatio, Lord Nelson”, Robert Southey, Chapter V} Nelson is said to have been pleased with the gift, keeping it propped against the wall of his cabin for some time, behind the chair in which he sat for dinner, and taking it with him to his next command. After Nelson was killed in 1805 during the Battle of Trafalgar, he was buried the coffin Hallowell had given him.

Hallowell himself, now in command of HMS Tigre, missed the Battle of Trafalgar. Nelson had sent Tigre, along with five other vessels in his squadron, to Gibraltar for water and on convoy duty. However his old command, Swiftsure, took part on the French side. She and her officers and crew, including Hallowell, had been captured in 1801 after a fight with a squadron of five French warships. Hallowell faced a court-martial over this incident when he was returned to England after a short time as a prisoner of war, but he was honorably acquitted of any failure of duty.

==Inheritance and change of name in later life==

In 1828, Sir Benjamin Hallowell succeeded to the estates of the Carew family of Beddington, Surrey, on the death of his cousin, who had herself inherited them from her brother-in-law. In accordance with the terms of her will, he assumed the Carew name and coat of arms, becoming known as Admiral Sir Benjamin Hallowell Carew. He died on 2 September 1834.

* Hallowell appeared as a character in Dudley Pope’s novel Ramage and the Drum Beat (1968).