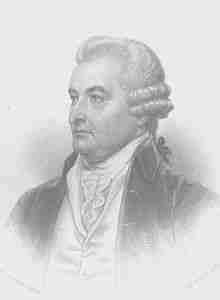 Benjamin Huntington (April 19, 1736 – October 16, 1800) was an eighteenth-century American lawyer, jurist and politician from Connecticut. He served in the Revolutionary War with the rank of General. He later served Connecticut as a delegate to the Second Continental Congress and as a member of the U.S. House of Representatives during the First United States Congress.

Huntington was born in Norwich, Connecticut, the only child of Daniel Huntington and his second wife Rachel (Wolcott) Huntington. He graduated from Yale College in 1761 and was appointed surveyor of lands for Windham County in October 1764. Huntington studied law and was admitted to the bar in 1765. He began the practice of law in Norwich. Yale College later bestowed an LL.D upon Huntington.

Huntington served as a member of the Connecticut House of Representatives from 1771 to 1780 and served as speaker of that body in 1778 and 1779. In 1775 he served on the committee of safety in the State House and was appointed to advise with Governor Jonathan Trumbull during the recess of the legislature. In 1778 Huntington was appointed a delegate to the Provincial Congress at New Haven.

On the incorporation of Norwich in 1784, he was elected its first Mayor, serving until his resignation in 1796. In 1793 he was appointed judge of the superior court of Connecticut, holding this office until 1798.

Huntington married Anne Huntington, of Windham, Connecticut, on May 5, 1765. She died on October 6, 1790 in Norwich. Their son was named Benjamin Huntington.

Huntington died on October 16, 1800 in Rome, New York and is interred in the Old Colony Cemetery in Norwich.