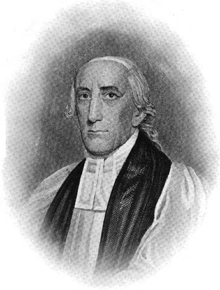 Moore was born in Newtown, New York, in 1748, the son of Samuel Moore and Sarah Fish Moore and the great-grandson of John Moore, the first Independent minister allowed in New England. He attended King’s College (now Columbia University), graduating in 1768 with a degree of A.B.. Moore returned to King’s College for a master’s degree in 1771. He traveled to England and was ordained deacon by Bishop Richard Terrick in Fulham Palace on June 24, 1774. He was advanced to the priesthood the next day.

On returning to America in 1775, Moore was made assistant rector at Trinity Church in New York City. In 1779, he married Charity Clarke, with whom he had one child, Clement Clarke Moore. While at Trinity Church, Moore earned a degree of doctor of sacred theology from his alma mater in 1789.

Moore kept neutral on the political questions surrounding the American Revolution and continued in his duties as assistant rector under Samuel Provoost until 1800 when, Provoost having resigned, Moore was elected rector.

Moore was elected coadjutor bishop of New York in 1801 to assist Provoost, who wished to retire. He was the 9th bishop in the ECUSA, and was consecrated in St. Michael’s Church, Trenton, New Jersey by Bishops William White, Thomas John Claggett, and Abraham Jarvis. That same year, Moore was elected President of Columbia College, a position he held for ten years. In 1811, Moore had a stroke and asked for the election of an additional coadjutor bishop to assist him, and John Henry Hobart was elected bishop that year. In 1815, Bishop Provoost died and Moore succeeded to become the second bishop of New York. He died the following year in Greenwich Village, New York and was buried at Trinity Church.