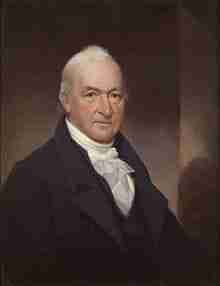 Benjamin Tallmadge (February 11, 1754 – March 7, 1835) was a member of the United States House of Representatives. His birth date is alternately listed as February 25, 1754.{Dubious|date=September 2010} He was the father of New York City Police Commissioner Frederick A. Tallmadge.

Tallmadge, the son of a clergyman, was born in Setauket, New York, a hamlet in the town of Brookhaven on Long Island. Tallmadge graduated from Yale college in 1773, and was a classmate of American Revolutionary War spy Nathan Hale.

From 1773-1776 Tallmadge was the superintendent of Wethersfield High School.

ӂӂ==American Revolutionary War== Tallmadge was a major in the 2nd Continental Light Dragoons. He was initially commissioned on June 20, 1776. Eventually, as the chief intelligence officer for George Washington, he was promoted to the rank of colonel. He organized the Culper Spy Ring based out of New York City and Long Island during the American Revolutionary War, using the code name John Bolton. The Culper Ring is thought by some to have revealed the betrayal of Benedict Arnold, though this is disputed. There is actually very little evidence to prove that Tallmadge had heard from a spy in New York City about the Arnold-André plot. However, it would have been easy for Tallmadge to suspect that Arnold was up to no good, since Arnold had arranged to meet Anderson (Major John André’s alias at the time) and Anderson was carrying military secrets back to New York City. The only thing Tallmadge could do was to persuade Jameson to recall lieutenant Allen who was already on his way to deliver the prisoner André into Arnold’s custody. However, Tallmadge was unable to dissuade Jameson from informing Arnold of Major André’s arrest. Tallmadge’s suspicion of Arnold’s treachery may not have been strong enough as Jameson later reported in a letter to Washington that neither Tallmadge nor other officers he consulted raised any objections to sending lieutenant Allen with a message to Arnold saying André was now in Jameson’s custody.

After Benedict Arnold’s British contact, John André, was caught, he was taken to North Castle, where the commander, Colonel Jameson, ordered his Lieutenant, Allen, to take a note and the incriminating documents found with André to their commander, Benedict Arnold, at West Point. Tallmadge, suspecting André to be a spy, and Benedict Arnold to be his accomplice, tried to have Jameson reverse his orders. He was unsuccessful, but did convince Jameson to send a rider and take Andre to Salem, eight miles east of the Hudson Riverhttp://en.wikipedia.org/w/index.php?title=Benjamin_Tallmadge&action=edit&section=1#ЭЭЭЭЭАааББыЯЯإونككككÀ, and to send the documents to George Washington. Lt. Allen was still to report to Benedict Arnold with Jameson’s note outlining the events. Later, Jameson was chastised by Washington for warning Arnold and allowing his escape. André was placed in Tallmadge’s custody until André’s execution.

On November 21, 1780, Tallmadge and his dragoons rowed across the Long Island Sound from Fairfield, Connecticut to Mt. Sinai, New York. The next day they proceeded to the south shore where they captured and burned down Manor St. George, which the British turned into a fort, and captured the soldiers within. On their march back to Mt. Sinai, Tallmadge stopped in Coram and ordered the burning of 300 tons of hay which the British had been stockpiling for the winter. George Washington, on hearing the news, sent the following letter to Tallmadge: I have received with much pleasure the report of your successful enterprise upon fort St. George, and was pleased with the destruction of the hay at Coram, which must be severely felt by the enemy at this time. I beg you to accept my thanks for your spirited execution of this business.

The Tallmadge Trail is marked along the route Tallmadge and his dragoons took from Mt. Sinai to Mastic Heights.

Tallmadge served at Washington’s headquarters from March 1781 until the Continental Army was disbanded in November 1783. He was breveted to the rank of lieutenant colonel on September 30, 1783.

Tallmadge was an Original Member of the New York Society of the Cincinnati.

Benjamin Tallmadge appears in the video game Assassin’s Creed III as head of the Culper Ring. In the game, he is the son of a former member of the Assassin Brotherhood and comes seeking the Brotherhood’s aid in stopping Thomas Hickey from assassinating General Washington. The game’s protagonist Connor follows Tallmadge to New York in order to foil the plot. Interestingly though he is present in the main story, he is not present in the Playstation 3 exclusive Benedict Arnold side missions which focus on Arnold being exposed as a traitor.