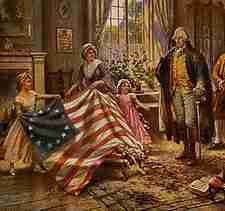 Betsy Ross (January 1, 1752 – January 30, 1836), born Elizabeth Griscom and also known by her second and third married names Elizabeth Ashburn and Elizabeth Claypoole, is widely credited with making the first American flag and changing the stars on the flag from six-pointed to easier-to-produce five-pointed stars. However, there is no archival evidence that this story is true.

==Early life== Betsy Ross was born to Samuel Griscom and Rebecca James Griscom in Philadelphia, Pennsylvania, on January 1, 1752, the eighth of seventeen children. She grew up in a household where the plain dress and strict discipline of the Society of Friends dominated her life. She learned to sew from her great-aunt Sarah Elizabeth Ann Griscom. Her great-grandfather Andrew Griscom, a Quaker carpenter, emigrated in 1680 from England.

After she finished her schooling at a Quaker public school, her father apprenticed her to an upholsterer named William Webster. At this job, she fell in love with fellow apprentice John Ross, who was the son of Aeneas Ross (and Sarah Leach), an assistant rector at (Episcopal) Christ Church. The couple eloped in 1773 when she was 21 at Hugg’s Tavern in Gloucester City, New Jersey. The marriage caused a split from her family and meant her expulsion from the Quaker congregation. The young couple soon started their own upholstery business and joined Christ Church, where their fellow congregants included George Washington and his family. Betsy and John Ross had no children.

The American Revolutionary War broke out when the two had been married for two years. As a member of the local militia, John Ross was assigned to guard munitions and, according to one legend, was killed by a gunpowder explosion, but family sources have doubts about this claim. The 24-year-old Betsy worked in the upholstery business repairing uniforms and making tents and blankets and stuffed paper tube cartridges with musket balls in 1779 for the Continental Army.

There is speculation that Betsy was the “beautiful young widow,” who distracted Carl von Donop in Mount Holly, New Jersey, after the Battle of Iron Works Hill, thus keeping his forces out of the Battle of Trenton.

On June 15, 1777, she married her second husband, mariner Joseph Ashburn. In 1780, Ashburn’s ship was captured by a British frigate and he was charged with treason and imprisoned at Old Mill Prison, in England. During this time, their daughter, Eliza, was born. Ashburn died in jail.

In May 1783, she married John Claypoole, who had met Joseph Ashburn in Old Mill Prison and had informed her of her husband’s death. The couple had five daughters. With the birth of their second daughter, they moved to a larger house on Second Street. After two decades of poor health, Claypoole died in 1817. Ross continued the upholstery business for 10 more years. Upon retirement, she moved in with her daughter, Susanna, to a section of Abington.

Ross, by then completely blind, spent her last three years living with her daughter, Jane, in Philadelphia. On Saturday, January 30, 1836, Ross died at the age of 84.

Although it is one of the most visited tourist sites in Philadelphia, the claim that Ross once lived at the Betsy Ross House is a matter of dispute.

Ross’s body was first buried at the Free Quaker burial ground on North 5th Street. Twenty years later, her remains were exhumed and reburied in the Mt. Moriah Cemetery in the Cobbs Creek Park section of Philadelphia. In preparation for the United States Bicentennial, the city ordered the remains moved to the courtyard of the Betsy Ross House in 1975; however, workers found no remains under her tombstone. Bones found elsewhere in the family plot were deemed to be hers and were re-interred in the current grave visited by tourists at the Betsy Ross House.

On January 1, 1952, the U.S. Post Office issued a stamp to honor the 200th anniversary of her birth. It shows her presenting the new flag to George Washington, Robert Morris, and George Ross. The design was taken from a painting by Charles H. Weisberger, one of the founders and first secretary of the Memorial Association.{citation needed|date = June 2011}

Research conducted by the National Museum of American History notes that the story of Betsy Ross making the first American flag for General George Washington entered into American consciousness about the time of the 1876 centennial celebrations. In 1870 Ross’s grandson, William J. Canby, presented a paper to the Historical Society of Pennsylvania in which he claimed that his grandmother had “made with her hands the first flag” of the United States. Canby said he first obtained this information from his aunt Clarissa Sydney (Claypoole) Wilson in 1857, twenty years after Betsy Ross’s death. Canby dates the historic episode based on Washington’s journey to Philadelphia, in late spring 1776, a year before Congress passed the Flag Act.

In the 2008 book The Star-Spangled Banner: The Making of an American Icon, Smithsonian experts point out that Canby’s recounting of the event appealed to Americans eager for stories about the revolution and its heroes and heroines. Betsy Ross was promoted as a patriotic role model for young girls and a symbol of women’s contributions to American history. Historian Laurel Thatcher Ulrich further explored this line of enquiry in a 2007 article, “How Betsy Ross Became Famous: Oral Tradition, Nationalism, and the Invention of History.” Ross biographer Marla Miller points out, however, that even if one accepts Canby’s presentation, Betsy Ross was merely one of several flag makers in Philadelphia, and her only contribution to the design was to change the 6-pointed stars to the easier 5-pointed stars.

The Betsy Ross Bridge, connecting Philadelphia with {USCity|Pennsauken|New Jersey}, is named in her honor.