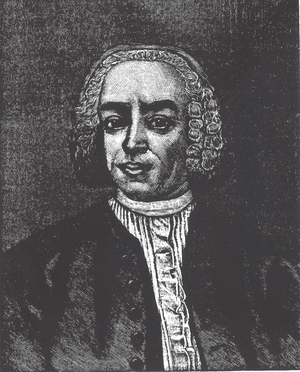 Dr. Bodo Otto (1711–1787) was a Senior Surgeon of the Continental Army during the American Revolution. He was one of the early settlers of Philadelphia, Pennsylvania, emigrating from Germany in 1755.

During the Revolution the Second Continental Congress appointed Otto to establish a military hospital in Trenton, New Jersey for the treatment of smallpox. He was present during the Battle of Long Island in 1776. He was also assigned to the Continental hospital at Valley Forge and located in the Uwchlan Meetinghouse. Later during the Revolution, Otto was put in charge of the hospitals in Yellow Springs (in what is now Chester Springs, Pennsylvania), where the ill soldiers from Valley Forge were treated.

His three sons were also physicians for the Army, and assisted him as Junior Surgeon and Surgeon Mates.

Otto did not retire from his Army service until the age of 70.

Prior to the Revolution Otto publicly opposed the Stamp Act and also served on the Berks County Committee of Public Safety.

Some of his medical training he received at the University of Göttingen. Bodo used Trinity Lutheran Church in Reading as a hospital to treat wounded soldiers from the Battle at Brandywine.

Otto died in 1787 and was buried in Reading, Pennsylvania at the Trinity Lutheran Church (where he was a member) Cemetery. Many of his surgical instruments as well as a portrait of him and his wife are in the collection of the Historical Society of Berks County in Reading, PA.