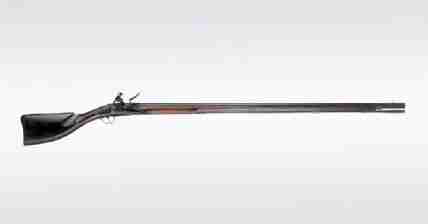 The British Long Land Pattern musket and its variations were the standard for British forces for well over 100 years.  It was a .75 caliber, flintlock, smoothbore musket weighing in at about 10.4 pounds with an overall length of 62.5 inches.  It was manufactured primarily from 1722-1768, at which point the Short Land Pattern became standard for the British infantry.  A 17″ triangular bayonet could be fixed to the frontm, making the weapon stand over 6-1/2 feet tall.  The ramrods on earlier production muskets were wooden, later replaced by iron.  This model firearm was used by both the British and Continental soldiers during the Revolutionary War.  This example has had its stoek replaced with a “club butt stock” example representative of those made by the Massachusetts colony. For more details, visit here.