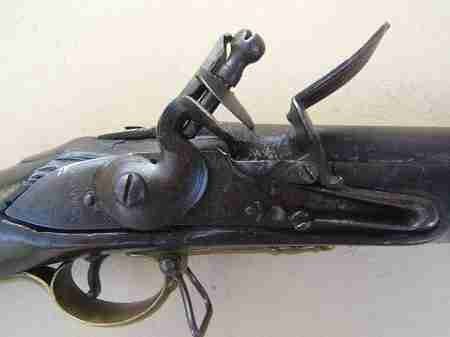 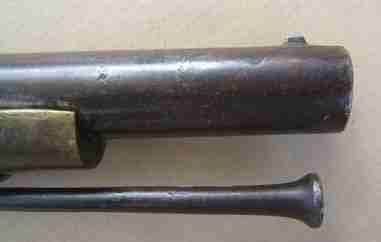 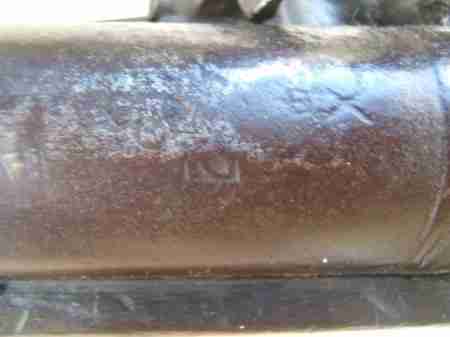 A REVOLUTIONARY WAR “EMERGENCY PRODUCTION” SHORTLAND PATTERN/SECOND MODEL PATTERN 1778 LIEGE CONTRACT BROWN BESS MUSKET, ca. 1778-79: Slightly reduced, 40 ¾”, round, pin-fastened, iron, smoothbore, .75 caliber barrel with a top bayonet lug/sight and two baluster turnings at the breech. The top of the breech with two GR/V Ordnance Proofmarks and an “IG” maker’s mark within a rectangular cartouche: of classic Liege Contract form {please see “Pattern Dates…”, pg. 7}—– forge-bushed touch-hole. Regulation Pattern 1756/68 type lock with single screw behind the cock and a trefoil finial frizzen-spring. The tail marked with a “Tower”, in classic Liege Contract “shaded” characters; and the face with a “rounded” Crown “GR” without a broad arrow/crown, beneath the powder-pan. The original rounded gooseneck hammer of “Wartime” production” with a hooked spur and a thread-engraved top-jaw, en suite with the lockplate and hammer. In original flintlock configuration; and in functional order with a strong mainspring and fine timing. Retains dark untouched surfaces with some light wear/pitting at the powder-pan and around the touch-hole. Barrel retains a dark, even, brown age patina with some light scattered pitting near the breech. Associated iron ramrod with button-head and complete with both sling swivels. Regulation Shortland Pattern (Liege Contract)brass hardware with an even mustard-tone: four brass ramrod pipes (the second pipe missing and of a “Pratt” improvement design), a vacant shield-type brass wrist escutcheon, a flat sideplate with a tail and the buttplate with a wide three (3) stepped tang. The trigger-guard with a raised hazelnut forward finial and the fore-end with its brass muzzle-cap. Regulation walnut fullstock with a pronounced lobe on the handrail and a well-defined fluted comb on the butt. Marked with two illegible Board of Ordnance inspector’s marks behind the trigger-guard, another marking behind the sideplate; and the face of the butt without a Storekeeper’s mark. In overall good+ original flintlock condition (as is). The stock with sharp contours, 65%+ finish, some scattered handling marks, signs of use/wear, an old missing chunk, at the top edge of the lock mortise, minor gouges, light scuffs and shrinkage. The barrel with smooth steel surfaces, clear markings and the noted working-period minor reduction at the muzzle. Very good lock with clear markings, fine mechanics and its original components *****A classic example of Revolutionary War Production Pattern 1778 Liege Contract Second Model Brown Bess Musket, ca. 1779. For more details please see DeWitt Bailey’s: “Pattern Dates for British Ordnance Small Arms 1718-1783” pg. 7, 10 & 68 & G. C. Neumann’s: “Battle Weapons of the American Revolution”.

August 16, 2014
We use cookies to ensure that we give you the best experience on our website. If you continue to use this site we will assume that you are happy with it.Ok