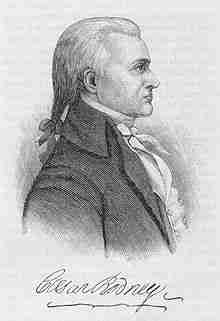 Caesar Rodney (October 7, 1728 – June 26, 1784) was an American lawyer and politician from St. Jones Neck in Dover Hundred, Kent County, Delaware, east of Dover. He was an officer of the Delaware militia during the French and Indian War and the American Revolution, a Continental Congressman from Delaware, a signer of the Declaration of Independence and President of Delaware during most of the American Revolution.

Caesar Rodney was born in 1728 on his family’s farm, “Byfield”, on St. Jones Neck in East Dover Hundred, Kent County, Delaware. He was the son of Caesar and Elizabeth Crawford Rodney and grandson of William Rodney, who came to America in the 1680s and had been Speaker of the Colonial Assembly of the Delaware Counties in 1704. Rodney’s mother was the daughter of the Rev. Thomas Crawford, Anglican rector of Christ Church at Dover. Among the Rodney family ancestors were the prominent Adelmare family in Treviso, Italy.{citation needed|date=April 2012}

Byfield was an {convert|800|acre|adj=on} prosperous farm, worked by slaves. With the addition of other adjacent properties, the Rodneys were, by the standards of the day, wealthy members of the local gentry. Sufficient income was earned from the sale of wheat and barley to the Philadelphia and West Indies market to provide enough cash and leisure to allow members of the family to participate in the social and political life of Kent County.

At the age of 16 and upon the death of his father in 1746, Caesar’s guardianship was entrusted to Nicholas Ridgely by the Delaware Orphan’s Court.

Thomas Rodney described his brother at this time as having a “great fund of wit and humor of the pleasing kind, so that his conversation was always bright and strong and conducted by wisdom… He always lived a bachelor, was generally esteemed, and indeed very popular.” Accordingly, he easily moved into the political world formerly occupied by his father and guardian. In 1755 he was elected Sheriff of Kent County and served the maximum three years allowed. This was a powerful and financially rewarding position in that it supervised elections and chose the grand jurors who set the county tax rate. After serving his three years he was appointed to a series of positions including Register of Wills, Recorder of Deeds, Clerk of the Orphan’s Court, Justice of the Peace, and judge in the lower courts. During the French and Indian War, he was commissioned captain of the Dover Hundred company in Col. John Vining’s regiment of the Delaware militia. They never saw active service. From 1769 through 1777 he was an Associate Justice of the Supreme Court of the Lower Counties.

Eighteenth century Delaware was politically divided into loose factions known as the “Court Party” and the “Country Party.” The majority Court Party was generally Anglican, strongest in Kent and Sussex County, worked well with the colonial Proprietary government, and were in favor of reconciliation with the British government. The minority Country Party was largely Ulster-Scot, centered in New Castle County, and quickly advocated independence from the British. In spite of being members of the Anglican, Kent County gentry, Rodney and his brother, Thomas Rodney, increasingly aligned themselves with the Country Party, a distinct minority in Kent County. As such, he generally worked in partnership with Thomas McKean from New Castle County and in opposition to George Read.

Rodney joined Thomas McKean as a delegate to the Stamp Act Congress in 1765 and was a leader of the Delaware Committee of Correspondence. He began his service in the Assembly of Delaware in the 1761/62 session and continued in office through the 1775/76 session. Several times he served as Speaker, including the momentous day of June 15, 1775 when “with Rodney in the chair and Thomas McKean leading the debate on the floor,” the Assembly of Delaware voted to separate all ties with the British Parliament and King.

Because of his military experience, Rodney was named Brigadier General of Delaware’s militia. As Delaware and the other colonies moved from protest to self-government and then to independence, the situation in strongly loyalist Kent and Sussex County rapidly deteriorated. Numerous local leaders spoke strongly in favor of maintaining the ties with Great Britain. Rodney and his militia were repeatedly required to suppress the resultant insurrections. Some of the Loyalists were arrested and jailed, some escaped to the swamps or British ships, and some just remained quietly resistant to the new government.

Meanwhile, Rodney served in the Continental Congress along with Thomas McKean and George Read from 1774 through 1776. Rodney was in Dover attending to Loyalist activity in Sussex County when he received word from Thomas McKean that he and Read were deadlocked on the vote for independence because John Dickinson, though in favor, could not sign the declaration because as a Quaker pacifist he was concerned it would result in war. To break the deadlock, Rodney rode {convert|70|mi} through a thunderstorm on the night of July 1, 1776, arriving in Philadelphia “in his boots and spurs” on July 2, just as the voting was beginning. He voted with McKean and thereby allowed Delaware to join eleven other states in voting in favor of the resolution of independence. The wording of the Declaration of Independence was approved two days later; Rodney signed it on August 2. Backlash in Delaware led to Rodney’s electoral defeat in Kent County for a seat in the upcoming Delaware Constitutional Convention and the new Delaware General Assembly.

Learning of the death of his friend John Haslet at the Battle of Princeton, Rodney went to join General George Washington briefly in early 1777. Washington soon returned him to Delaware, where as Major-General of the Delaware militia, he protected the state from British military intrusions and controlled continued loyalist activity, particularly in Sussex County.

Amidst the catastrophic events following the Battle of Brandywine, and the British occupation of Wilmington and Philadelphia, a new General Assembly was elected in October 1777. First, it promptly put Rodney and Thomas McKean back into the Continental Congress. Then, with State President John McKinly in captivity, and President George Read completely exhausted, they elected Rodney as President of Delaware on March 31, 1778. The office did not have the authority of a modern Governor in the United States, so Rodney’s success came from his popularity with the General Assembly, where the real authority lay, and from the loyalty of the Delaware militia, which was the only means of enforcing that authority.

Meanwhile Rodney scoured the state for money, supplies and soldiers to support the national war effort. Delaware Continentals had fought well in many battles from the Battle of Long Island to the Battle of Monmouth, but in 1780 the army suffered its worst defeat at the Battle of Camden in South Carolina. The regiment was nearly destroyed and the remnant was so reduced it could only fight with a Maryland regiment for the remainder of the war. Rodney had done much to stabilize the situation, but his health was worsening and he resigned his office November 6, 1781, just after the conclusive Battle of Yorktown.

Rodney was elected by the Delaware General Assembly to the United States Congress under the Articles of Confederation in 1782 and 1783, but was unable to attend because of ill health. However, two years after leaving the State Presidency he was elected to the 1783/84 session of the Legislative Council and, as a final gesture of respect, the Council selected him to be their Speaker. His health was now in rapid decline and even though the Legislative Council met at his home for a short time, he died before the session ended. He was buried in the cemetery at Christ Church in Dover, Delaware.