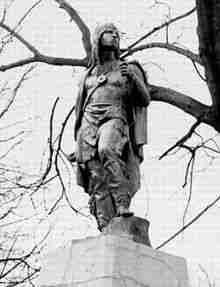 Captain Pipe (b. c. 1725? – d. c. 1818?), called Konieschquanoheel and also known as Hopocan, was an 18th-century chief of the Algonquian-speaking Lenape (Delaware) and a member of the Wolf Clan. He was a warrior and succeeded his maternal uncle Custaloga as chief by 1773.

Although Hopocan tried to stay neutral during the American Revolutionary War, after many of his family were killed by Americans, he allied with the British. After the war, he moved his people into Ohio Country, where he made treaties with the Continental Congress to try to protect Lenape land, but settlers continued to encroach on his people. In 1812 he moved with his people westward into present-day Indiana, where some accounts say he died.

In Lenape culture people did not share their real names, because it could give spiritual power to enemies. In addition, they often were given other names, or nicknames, at different periods of their lives, sometimes to express life passages, such as reaching manhood. The real name of Captain Pipe was Konieschquanoheel (meaning “Maker of Daylight”). His public name was Hopocan (meaning tobacco pipe); because of the translated meaning, the Europeans called him Captain Pipe, which was what they used in historical records.

Some say Hopocan was born about 1725; others put his birth at 1740. He was born into the Wolf Clan through his mother, for the Lenape base their clans on matrilineal descent. Little is known of his early years. He was probably born near the Susquehanna River in Pennsylvania. His maternal uncle was Chief Custaloga, whom he succeeded, according to the matrilineal descent rules. Captain Pipe likely spent his early years either at Custaloga’s Town, along French Creek in Mercer County, or Custaloga’s other main village, Cussewago, at the present site of Meadville in Crawford County.

He was given the public name or nickname of Hopocan (meaning tobacco pipe). Captain Pipe, as the colonists called him, is first noted in historical records in 1759 among the warriors at a conference held at Fort Pitt, July 1759, by Hugh Mercer, the agent of Sir William Johnston, the chief British Indian agent in the Northeast. Mercer had brought together the Iroquois, Lenape and Shawnee, trying to secure their alliance during the Seven Years War with the French (known in the colonies as the French and Indian War). Custaloga was known to have moved his band from French Creek into what is now Ohio. There is some evidence that he may have moved back to Pennsylvania to the Kuskuskies Towns, on the Shenango River near present-day New Castle. These four villages had been inhabited by Iroquois Seneca, but by 1756 they were settled by Lenape displaced from further east during the French and Indian War.

In 1762, when the Lenape gave the Moravian missionary Fredrick Christian Post permission to build a cabin on the Tuscarawas River at present Bolivar, Ohio, Hopocan was given the job of marking out the land he was to receive. In 1765 the warrior was recorded at another conference at Fort Pitt, at which about 600 chiefs and warriors, and many women and children were present. In 1768 he again met in a conference at Fort Pitt, held by George Croghan, the sub-agent of Sir William Johnston, and gathering more than 1,000 Iroquois, Lenape, Shawnee, Wyandot and Mohegan. By 1773, Captain Pipe succeeded Custaloga as chief.

During the American Revolution, Captain Pipe tried to remain neutral; he refused to take up arms against the rebels even after General Edward Hand killed his mother, brother, and a few of his children during a military campaign in 1778. Failing to distinguish among the Native American groups, Hand had attacked neutral Lenape while trying to reduce the Indian threat to settlers in the Ohio Country, because other tribes had allied with the British.

In 1778 Captain Pipe was with White Eyes and Killbuck when they signed the first treaty between the Continental Congress and Native people. Later that same year, General Lachlan McIntosh, the American commander at Fort Pitt, requested permission from the Lenape to march through their territory to attack Fort Detroit. Captain Pipe and other Lenape chiefs agreed, based on the Americans’ building a fort to protect the Lenape from the British military and European-American settlers. In response, McIntosh had Fort Laurens built near the Delaware villages in eastern Ohio, but he demanded their Ohio Country warriors assist the Americans in capturing Fort Detroit, and threatened them with extermination if they refused.

Believing that the Americans could not protect them from the British and their native allies, Captain Pipe and many other Lenape bands began to reach out to the British as allies. Also in 1778, Pipe and the members of his tribe who supported war, departed from the Tuscarawas and relocated on the Walhonding River, about fifteen miles above the present site of Coshocton, Ohio.

In 1781 Colonel Daniel Brodhead attacked and destroyed this village, the last step in Pipe’s move to ally with the British. Captain Pipe became the leader of those natives who supported the British and moved his people to the Tymochtee Creek near the Sandusky River. This village was known as “Pipe’s Town,” and was located near present-day Crawford in Wyandot County. He spent the remainder of the war trying to thwart American expansion into the Ohio Country.

In 1782, Pipe helped defeat the Crawford Expedition, headed by William Crawford. Seeking vengeance for the Gnadenhutten Massacre, in which nearly 100 Lenape were killed, the warriors marked Crawford for death by painting his face black. They conducted ritual torture of Crawford before killing him, and he begged Simon Girty, an American interpreter, to shoot him. Captured by the Seneca as a boy and assimilating with them, Girty knew he would likely be killed if he intervened in the ritual, but he was strongly criticized by settlers for his inaction.

Captain Pipe continued to resist white settlement of the Ohio Country (known by the Americans as the Northwest Territory by then). By the 1810s and 1820s, Captain Pipe realized his people had little chance against the Americans and began to negotiate treaties with the government. The pioneer settlers continued to violate these agreements, moving onto land set aside for the Lenape.

In 1788 when settlers landed at what is now Marietta, Ohio, they found Captain Pipe and about seventy warriors encamped in the area. At that time General Josiah Harmar described him as a “manly old fellow, and much more of a gentleman than the generality of the frontier people.” By this time he was being called “Old Pipe.” According to the most reliable accounts, Captain Pipe was then about forty-eight years of age (considered old in those years when life expectancy of both settlers and Indians was less than during the late twentieth century). During this time, he also resided at “Birds Run” and “Indian Camp”, communities both still located on Ohio State Route 658, and “Flatridge”, all about 10 miles NW of present-day Cambridge. This was the location of many Lenape ceremonies, and their artifacts have been found at those locations. Captain Pipe was believed to have last visited around 1800.

It is believed that some time between 1793 and 1795, ”Hopocan’ made his headquarters at Jerometown, Ohio. In his later years, he resided with his people on the upper branches of the Mohican River, the head branches of the Black River, the Vermillion River and the Cuyahoga River, all in Ohio. In 1808-09 early white settlers to the area of what is now Jeromesville in Ashland County on the Jerome Fork of the Mohican River, found Lenape people living at the old Mohican village of Johnstown. (This was about three-fourths of a mile southwest of the present-day Jeromesville). The home of Old Captain Pipe was located nearby, as reported in stories of the settlers and the remaining Lenape, who said he lived there until 1812.

In the spring of 1812, Old Captain Pipe and his people removed westward. Some reports say they lived near present-day Orestes in Madison County, Indiana, but others refute that. The Treaty of St. Mary’s in 1818 gave the tribes three years before having to be removed from Indiana to Kansas. They departed peacefully in 1821. Chief Pipe was said to have died around 1818 near Orestes and is supposedly buried there. Other reports claim that he removed to Canada and died there.

Captain Pipe had a son, also named Captain Pipe, who signed many treaties and moved with the Lenape to Kansas.