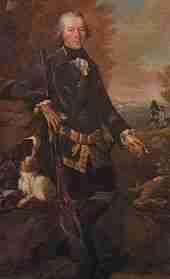 The son of a noble family of Hesse-Kassel (or Hesse-Cassel), Donop was well connected in the European courts and served as personal adjutant to the Landgraf of Hesse-Kassel. He served with distinction in the Seven Years’ War. When the American Revolution began, Donop asked for leave to serve in America against the revolutionaries. The Landgraf appointed him as commander of four battalions of grenadiers and the prestigious Jäger Corps. A highly ambitious officer, Donop hoped to remain in America after the war to pursue dreams of power and glory.{sfnp|Fischer|2004|loc=p. 56}

Wearing a veneer of civility and deferential to his superiors, Donop was an able officer but was not well liked by his subordinates. To his inferiors he was short and harsh, and he had a take-no-prisoners policy that was enforced by severe beatings.{sfnp|Fischer|2004|loc=p. 57}

Donop’s troops participated in the initial British landing at Long Island, New York, on August 22, 1776, and the succeeding Battle of Long Island on August 27. They also participated in the landing at Kip’s Bay on Manhattan Island on the night of September 14. Donop distinguished himself at the Battle of Harlem Heights, going to the aid of the British troops involved.

===Retreat after Battle of Trenton===

Donop was the senior officer present in southern New Jersey in late 1776, and commanded the garrisons in Trenton, Burlington, and Bordentown, which consisted of several Hessian battalions, the Forty-second Highland Regiment (commanded by Colonel Stirling), and Jäger detachments. His main camp was at Bordentown prior to the Battle of Trenton, with one battalion occupying the town and the rest billeted along the country roads in Slabtown [Jacksonville] Black Horse [Columbus] Burlington City and White House (the Mary Field Plantation). His overall commander was Major General James Grant. Donop wanted to absorb Colonel Johann Rall’s brigade into his garrison to fortify Trenton, but Sir William Howe was persuaded to let Rall hold command on his own in Trenton.{sfnp|Fischer|2004|loc=pp. 187–90} Warned by locals of impending attack, Donop warned Grant, who dismissed these cautions.

On December 22, 1776, Colonial militia under the command of Colonel Samuel Griffin attacked von Donop’s southern outposts at Slabtown. This force of colonials was sent from Philadelphia by General Israel Putnam as a deterrent to further encroachment on the river crossings opposite the colonial capitol at Philadelphia. The colonials numbered about 900 local militia and a few regulars, while von Donop commanded over 2,000 veterans.

In response to this attack, von Donop moved his entire force south, pushing the colonials through Mount Holly at the Battle of Iron Works Hill and onto the opposite side of the Rancocas Creek. On Christmas Eve, the colonials retreated a few miles to Moorestown. Von Donp’s officers wanted him to return to Bordentown, within easy supporting distance for Rall. Von Donop had nothing but contempt for Rall and decided to spend Christmas in the company of “a beautiful young widow” – as reported by his Captain of Jagers, Johann Ewald. There is some speculation, but no proof, that the “beautiful young widow” was Betsy Ross.{sfnp|Fischer|2004|loc=p. 56} A rider brought news of the disaster at Trenton about mid-day on December 26. Out of position, and fearing he would be cut off from the remaining Royal Forces, von Donop ordered his corps to move through Crosswicks to Princeton. He left a rear guard and allowed for baggage wagons, wounded and such to be brought along. He abandoned a good bit of plunder in his excitement and urgency. The victory at Trenton was won by Washington, but some credit should be given to the young widow who held von Donop out of position a day too long to be of help to Rall.

When Howe’s forces captured Philadelphia in 1777, he then acted to open the Delaware River to the navy. The effort was directed at the forts on either side of the river. The Royal Navy attacked Fort Mifflin in Pennsylvania. In an attempt to recoup his tarnished reputation from his defeat at Trenton, Donop volunteered to attempt the capture of Fort Mercer at Red Bank in what is now National Park, New Jersey. General Howe agreed, if it could be done easily, and gave Donop command of 2,000 Hessian troops, with which he crossed the Delaware River on October 22. That afternoon, Donop surrounded the fort and demanded surrender from Colonel Christopher Greene with the threat of invasion and no quarter. Greene, in a strong position with 400 Rhode Islanders and in possession of plentiful cannon, grapeshot, and powder, rejected the demand. Donop led 1,200 Hessians in three attacks on the fort, all of which were beaten back resulting in nearly 400 Hessian casualties, including Donop himself. Fatally wounded in what would be known as the Battle of Red Bank, Donop died two days later on October 25, 1777. He said to a brother officer before he died: “It is finishing a noble career early; but I die the victim of my ambition, and of the avarice of my sovereign.”