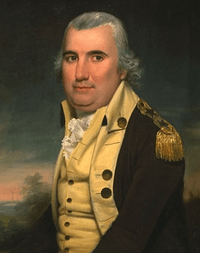 Charles Cotesworth “C. C.” Pinckney (February 25, 1746{spaced ndash}August 16, 1825), was an early American statesman of South Carolina, Revolutionary War veteran, and delegate to the Constitutional Convention. He was twice nominated by the Federalist Party as their presidential candidate, but he did not win either election.

In 1753, Pinckney’s father moved the family to London, England, where he served as the colony’s agent (essentially as a lobbyist to protect South Carolina’s commercial and political interests). Both Charles and his brother Thomas were enrolled in the Westminster School, where they remained after the rest of the family returned to South Carolina in 1758. Both brothers also studied at Oxford University. Pinckney matriculated at Christ Church, Oxford in 1764, and left to study law at the Middle Temple in 1766. Pinckney was called to the bar in 1769, but he continued his education in France for another year, studying botany and chemistry. He also had a brief stint at the Royal Military College at Caen.

In 1773, Pinckney married Sarah Middleton, whose father Henry Middleton served as the second President of the Continental Congress and whose brother Arthur Middleton signed the Declaration of Independence. Sarah died in 1784. In 1786, he remarried to Mary Stead, who came from a wealthy family of planters in Georgia. Pinckney had three daughters.

After returning to South Carolina from Europe, Pinckney began to practice law in Charleston. He was first elected to a seat in the colonial legislature in 1770. In 1773 he served as a regional attorney general. When war erupted between the thirteen American colonies and Great Britain in 1775, Pinckney stood with the American Patriots; in that year he was a member of the first South Carolina provincial congress, which helped South Carolina transition from being a British colony to being an independent state. During the American Revolutionary War he would serve in the lower house of the state legislature and as a member of the South Carolina Senate in addition to his military service.

In 1775, after the American Revolutionary War had broken out, Pinckney volunteered for military service as a full-time regular officer in George Washington’s Continental Army. As a senior company commander with the rank of captain, Pinckney raised and led the elite Grenadiers of the 1st South Carolina Regiment. He participated in the successful defense of Charleston in the Battle of Sullivan’s Island in June 1776, when British forces under General Sir Henry Clinton staged an amphibious attack on the state capital. Later in 1776 Pinckney took command of the regiment, with the rank of colonel, a position he retained to the end of the war.

After this, the British Army shifted its focus to the Northern and Mid-Atlantic states. Pinckney led his regiment north to join General Washington’s troops near Philadelphia, Pennsylvania. Pinckney and his regiment then participated in the Battle of Brandywine and the Battle of Germantown. Around this time he first met fellow officers and future Federalist statesmen Alexander Hamilton and James McHenry.

In 1778, Pinckney and his regiment, returning to the South, took part in a failed American expedition attempting to seize British East Florida. The expedition ended due to severe logistical difficulties and a British victory in the Battle of Alligator Bridge. Later that year, the British Army shifted its focus to the Southern theater, capturing Savannah, Georgia, that December. In October 1779, the Southern army of Major General Benjamin Lincoln, with Pinckney leading one of its brigades, attempted to re-take Savannah in the Siege of Savannah. This attack was disaster for the Americans, who suffered numerous casualties.

Pinckney then participated in 1780 defense of Charleston against British siege. Major General Lincoln surrendered his 5,000 men to the British on May 12, 1780, whereupon Pinckney became a prisoner of war. As a prisoner of war, he played a major role in maintaining the troops’ loyalty to the Patriots’ cause. During this time, he famously said, “If I had a vein that did not beat with the love of my Country, I myself would open it. If I had a drop of blood that could flow dishonorable, I myself would let it out.” He was kept in close confinement until his release in 1782. In November 1783, he was commissioned a brevet Brigadier General in the Continental Army shortly before the southern regiments were disbanded. He was promoted to Major General during his subsequent service in the South Carolina militia.

Pinckney, who had returned to the lower house of the state legislature, represented South Carolina at the constitutional convention of 1787, where he was an influential member. Pinckney advocated the idea that slaves be counted as a basis of representation and opposed abolition of the slave trade. He also advocated a strong national government (albeit one with a system of checks and balances) to replace the weak one of the time. He opposed as impracticable the election of representatives by popular vote. He also opposed paying senators, who, he thought, should be men of independent wealth. Pinckney played a key role in requiring treaties to be ratified by the Senate and in the compromise that resulted in the abolition of the Atlantic slave trade. He also opposed placing a limitation on the size of a federal standing army.

Pinckney played a prominent role in securing the ratification of the Federal constitution in the South Carolina convention of 1788, and in framing the South Carolina Constitution in the convention of 1790. At the ratification convention, Pinckney distinguished three types of government and said republics were where “the people at large, either collectively or by representation, form the legislature”. After this, he announced his retirement from politics.

In 1789, President George Washington offered Pinckney his choice of the State Department or the War Department; Pinckney declined both. When Washington offered Pinckney the role of Ambassador to France in 1796, Pinckney accepted. Relations with the French First Republic was then at a low ebb: the Jay Treaty between the US and Great Britain had angered members of the ruling French Directory, and they had ordered the French Navy to step up seizures of American merchant vessels found to be trading with Britain, with whom France was at war. When Pinckney presented his credentials in November 1796, they were refused, with the Directory stating that no ambassador could be accepted until the outstanding crisis was resolved.

After Pinckney reported this to the recently inaugurated President John Adams in 1797, a commission composed of Pinckney, John Marshall, and Elbridge Gerry was established to treat with the French. Gerry and Marshall joined Pinckney at The Hague, and traveled to Paris in October 1797. After a cursory preliminary meeting with the new French Foreign Minister Talleyrand, the commissioners were approached informally by a series of intermediaries who spelled out French demands. These included a large loan to France, which the commissioners had been instructed to refuse, and substantial bribes for Talleyrand and members of the Directory, which the commissioners found offensive. These exchanges became the basis for what became known as the “XYZ Affair” when documents concerning them were published in 1798.

Talleyrand, who was aware of political differences in the commission (Pinckney and Marshall were Federalists who favored Britain, and Gerry wavered politically between moderate Federalism ideas and the Jeffersonian Republicans, who favored France and were strongly hostile to Britain), exploited this division in the informal discussions. Pinckney and Marshall left France in April 1798; Gerry remained behind in an unofficial capacity, seeking to moderate French demands. The breakdown of negotiations led to what became known as the undeclared Quasi-War (1798-1800), pitting the two nation’s navies against each other. In July 1798 he was commissioned as a Major General in the US Army, and served until the end of the crisis between the two countries.

In the 1800 presidential election, Pinckney was the Federalist candidate for vice-president, running with the incumbent president, John Adams. They were defeated by the Democratic-Republicans Thomas Jefferson (who became president) and Aaron Burr (who became vice president). In 1804, the Federalist Party nominated Pinckney to run for the presidency against Jefferson. Jefferson, who was very popular due to the acquisition of the Louisiana Purchase and booming trade, defeated Pinckney in a landslide. Pinckney won only 27.2% of the popular vote and carried only two states, Delaware and Connecticut. In 1808 he was again the Federalist nominee for president, running against Jefferson’s Secretary of State, James Madison. Pinckney did not fare much better against Madison, carrying only five states and winning 32.4% of the popular vote. From 1805 until his death, Pinckney was president-general of the Society of the Cincinnati. Pinckney died on August 16, 1825 and was buried in St. Michael’s Churchyard in Charleston, South Carolina. His tombstone reads, “One of the founders of the American Republic. In war he was a companion in arms and friend of Washington. In peace he enjoyed his unchanging confidence.”