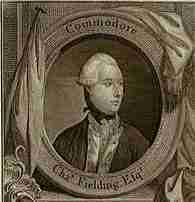 Charles Fielding (or Feilding; 2 July 1738 – 11 January 1783) was a British naval officer who gained brief notoriety for his role in the Affair of Fielding and Bylandt in the run-up to the Fourth Anglo-Dutch War. He attained the “rank” of Commodore and died of gangrene after being wounded in action during the Battle of Cape Spartel, commanding HMS Ganges.

Fielding was born the son of Charles Feilding, Colonel in the Guards and Equerry to king George II of England, and Anne Palmer. His biographers apparently thought it more important that he was related to the fourth Earl of Denbigh, whose third son his father was. (He himself was a second son.) He married Sophia Finch, a Woman of the Bedchamber of the Queen (Charlotte) on 29 February 1772. (She was a sister of George Finch, 9th Earl of Winchilsea.) They had three daughters and a son, also called Charles, who became a rear-admiral in the Royal Navy.

Fielding enlisted in the Royal Navy at an early age, probably following the usual career after starting as a midshipman. From his early career little is known, according to his biographer, Charnock, but he was appointed a Post-Captain on 27 August 1760 (during the Seven Years’ War) and given command of HMS Flamstead (20). In 1762 he was given command of HMS Unicorn which was decommissioned after the end of the war. Apparently, he did not receive a new command until 1770, when he was appointed to HMS Achilles (a fourth-rate of 60 guns, launched in 1757) as flag captain of Admiral Sir Francis Geary.

After his return to Europe in 1779 he was given command of HMS Namur, a second rate of 90 guns, and put in charge of a squadron of ships of the line cruising the English Channel to intercept Dutch convoys. As officer commanding a squadron he was allowed to carry the title of “commodore” though his formal rank remained that of captain. He intercepted in peace time a convoy escorted by a smaller squadron of naval vessels of the Dutch Republic under command of Rear-Admiral Count Lodewijk van Bylandt, which led to the celebrated Affair of Fielding and Bylandt of 31 December 1779. The commotion this incident caused in the Republic would eventually lead to the Fourth Anglo-Dutch War.

Shortly afterwards he was removed to HMS Minerva in which he accompanied Admiral George Darby, when the latter relieved Gibraltar in April, 1781. After the commissioning of HMS Ganges in 1782 he became her first captain. He accompanied Admiral Howe (with whom he had already served in American waters) to Gibraltar in September, 1782. He was lightly wounded by a splinter in the arm during the skirmish that is known as the Battle of Cape Spartel on 20 October 1782. Though the wound was far from serious, infection set in and Fielding died of gangrene on 11 January of the following year.