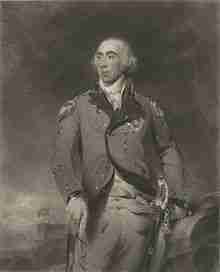 Grey was born at his family’s estate, known as Howick, 30 miles north of Newcastle upon Tyne and one mile from the North Sea, in Northumberland. His exact birthdate is unknown, but he was baptized 23 October 1729, so he was probably born in October. His father was Henry Grey (later Sir Henry Grey, first baronet of Howick) and his mother was Hannah Grey (née Wood).

Because he had three older brothers, Grey didn’t expect to inherit his father’s titles and estates, so he pursued a career in the military.

In the Seven Years’ War, he served as adjutant in the staff of Duke Ferdinand of Brunswick and on 1 August 1759 was wounded at Minden. On 14 October 1760 he commanded a Light Company at the Battle of Campen, where he was again wounded. One year later, as Lt. Colonel of the 98th Foot, he participated in the Capture of Belle Île, off the coast of Brittany. Next, he served at the Battle of Havana in 1762. Later, he was on the staff of Wilhelm, Count of Schaumburg-Lippe during the Spanish invasion of Portugal (1762). In 1763 he retired on half-pay, but in 1772 he received a promotion to Colonel and served as aide-de-camp to King George III.

In 1778 he led raids at New Bedford on 5–6 September, destroying nearly all the shipping and burning twenty shops and twenty-two houses in the town, and Martha’s Vineyard, where between 10 and 15 September, the British carried off all the sheep, swine, cattle and oxen that they could find with promise of payment in New York. On 27th September 1778, Grey used the same methods as he had at the Battle of Paoli in a controversial night attack at Old Tappan, New Jersey, which came to be known as the Baylor Massacre. He was recalled to England and became a knight of the Order of the Bath and a lieutenant general. He later was appointed commander-in-chief of the British troops in America, but hostilities ended before he could take command.

At the outset of the war with Revolutionary France, in 1793, Sir Charles Grey was appointed commander of the West Indian expedition. First, however, he went to Ostend to participate in the relief of Nieuwpoort, Belgium. In early 1794, he and Admiral Sir John Jervis led a British force to capture Martinique. The campaign lasted about six weeks with the British capturing Fort Royal and Fort Saint Louis on 22 March, and Fort Bourbon two days later. The British then occupied Martinique until the Treaty of Amiens returned the island to the French in 1802. Next Grey was involved in the invasion of Guadeloupe.

Between the years of 1797 and 1807 General Grey held the position of Governor of Guernsey, in the Channel Islands

In late 1794 he returned to England. From 1798 to 1799 he served as Commander of the Southern District, retiring in 1799. In acknowledgment of his service, he was raised in January 1801 to the peerage as Baron Grey, of Howick in the County of Northumberland. In 1806, he was created Earl Grey and Viscount Howick, in the County of Northumberland. He died the next year, at the age of 78.

Grey and his wife brought up Eliza Courtney, the illegitimate daughter of their son Charles with Georgiana, Duchess of Devonshire. He was also an ancestor of Prime Ministers Anthony Eden and Alec Douglas-Home, and of Diana, Princess of Wales