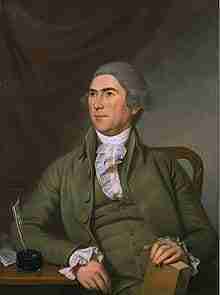 Charles Pettit (1736 – September 4, 1806) was an American lawyer and merchant from New Jersey and Philadelphia, Pennsylvania. He served as a delegate for Pennsylvania to the Confederation Congress from 1785 to 1787.

Charles was born in southern Hunterdon County, New Jersey to John Pettit, a wealthy Philadelphia merchant. In the 1750s he married Sarah Reed, a half-sister of Joseph Reed who exerted considerable influence on Pettit’s later career.

Pettit was educated classically, settled in Burlington, New Jersey, and began his career as an iron merchant. In 1767 he accepted the first of many public service tasks as a deputy surrogate for the province to assist his brother-in-law who was Secretary. Charles became the colony’s secretary in turn when Reed resigned in 1769. He was admitted to the bar in 1770, and in 1773 became a member of the Governor’s Council.

Pettit served as a personal secretary to Governor William Franklin from 1772 to 1774, and moved to South Amboy, New Jersey. As the Revolution neared, he resigned his post, but returned to it as secretary to the revolutionary governor, William Livingston, in 1776. From 1776 to 1778 he held the office of provincial secretary (a title specified by the 1776 New Jersey State Constitution and later known as Secretary of State of New Jersey).

In 1777, Joseph Reed again influenced his career. Reed, at the time was serving in the Continental Congress and worked on the committee that recommended an overhaul of the quartermaster’s function. In 1778, Pettit was appointed deputy quartermaster general, essentially a civilian post, though it came with a commission as a colonel in the Continental Army, a perk which offended some of the army’s line officers. He kept the accounts for the corps from then until his resignation in 1781. He also moved to Philadelphia to be closer to the Congress.

After his military service, Pettit resumed a mercantile career, this time in Philadelphia. He represented Philadelphia in the state’s House of Representatives in 1784 and 1785. The legislature then selected him twice as a delegate to the Continental Congress, where he served from 1785 to 1787. He also appointed a trustee for the University of the State of Pennsylvania in 1786, and continued in the post after it merged to create the University of Pennsylvania in 1791.

Pettit died in Philadelphia in 1806. He had been a member of the American Philosophical Society since 1779.