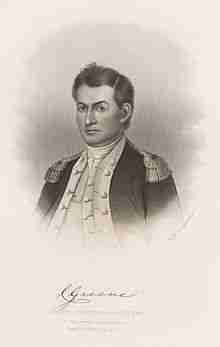 Christopher Greene was born 12 May 1737 at Occupessatuxet, a village of the town of Warwick, Rhode Island, to Judge Phillip Greene and Elizabeth (Wickes) Greene. On May 6, 1757 Christopher married his third cousin Anna Lippitt, born November 15, 1735, the daughter of Jeremiah Lippitt and Welthian Greene, both descended from a distinguished Rhode Island colonial family, Jeremiah was the Town Clerk of Warwick, from June 1742 to his death in 1776, with the exception of the year 1775. He was a deputy to the General Assembly for four years, and Assistant five years.

Christopher and Anna would have nine children together. When Greene’s father died in 1761, Christopher inherited the family’s mill estate and ran the business until he became an officer in the Continental Army. He served in the Rhode Island Legislature from 1772 to 1774. Greene was chosen a lieutenant of the Kentish Guards 1774.

In May 1775, he was appointed a major in the Army of Observation by the Rhode Island legislature. He was given command of a company and marched to Cambridge, Massachusetts, in support of the rebellion against British rule. In 1775 George Washington put him in charge of a Continental regiment in Cambridge under the command of Benedict Arnold. Greene’s regiment was part of Arnold’s expedition through present-day Maine to attack the British garrison at Quebec. In the assault on that city, Greene led a detachment of troops, and after Arnold was wounded Greene was taken prisoner. He was exchanged after eight months’ confinement.

In June 1776, Greene was promoted to major under James M. Varnum, in a division which was commanded by his third cousin, General Nathanael Greene. In October he was promoted to colonel, with charge of Fort Mercer, New Jersey, on the Delaware River near the Gloucester County town of Red Bank (now National Park, New Jersey), south of Philadelphia and Trenton.

Fort Mercer and its Pennsylvania counterpart, Fort Mifflin, had the mission of defending the Delaware River against British naval movements on the river. After the British captured Philadelphia in September 1777, the forts prevented the Royal Navy from bringing supplies into the city.

On October 22, 1777, the fort was assaulted by the Hessians under Colonel Carl von Donop, in what came to be called the Battle of Red Bank. Von Donop was eager to avenge the 1776 defeat of Hessian troops by Washington in the Battle of Trenton. Though they were supported by gunfire from six British men-o-war in the Delaware River, they were repulsed with heavy loss, and von Donop was mortally wounded.

==The Battle of Rhode Island==

Colonel Christopher Greene returned to the cooler climate of his home state. He struggled to piece together a unit of former slaves – the 1st Rhode Island. When the idea of offering slaves their freedom in return for active service was first suggested, all concerned believed the plan would help solve the problem of finding Continental recruits. The Rhode Island General Assembly voted that every able-bodied Negro, mulatto, and Indian slave could enlist for the duration of the war with bounties and wages the same as for free men. Once enlisted and approved by the regimental officers the slave would become absolutely free.

Unfortunately the small population of 3,331 blacks and Indians could not support the effort adequately. Fewer than two hundred soldiers were recruited. Finding the scheme expensive and impractical, the legislators reversed themselves. “No negroe, mulatto, nor Indian slave will be permitted to enlist in the Continental battalions after 10 June 1778.” Greene and his officers proceeded to train the black infantrymen who had already signed on. All heard the news that a French fleet was on the way, and many were looking forward to some serious fighting in the near future.

Colonel Greene and his regiment were detached for special service in Rhode Island, and he was placed under the command of General John Sullivan. General Sullivan, whose headquarters were in Providence, was charged with the task of containing the depredations of the 4,000 British and Hessian troops occupying Newport on Aquidneck Island. For this purpose he had only a brigade of Rhode Island state troops, and several thousand as yet unmobilized militia. In early July 1778 orders from General Washington changed Sullivan’s mission from defense to attack and thrust the quiet Rhode Island sector into the forefront of the war.

The Battle of Rhode Island commenced on August 29, 1778. Colonel Greene temporarily commanded a brigade in the center of the American order of battle. Greene’s “Black Regiment”, now under General Nathanael Greene’s longtime friend, Maj. Samuel Ward, Jr, held the far right of the American line. This regiment served with distinction, praised by the allied French officers for repulsing attacks by Hessian soldiers. Even though the battle was tactically inconclusive, the Americans retreated off the island afterward.

Colonel Greene and several of his Negro soldiers died on May 13 or 14, 1781, when a group of Loyalists surrounded his headquarters on the Croton River in Westchester County, New York. From one account of the attack, “his body was found in the woods, about a mile distant from his tent, cut, and mangled in the most shocking way.” A common conjecture is that this indignity was retribution for his leading black soldiers against the British Crown.

Congress voted Greene a sword, which in 1786 was presented to his son by Secretary of War Henry Knox. A monument to his memory was erected near Red Bank, New Jersey, in October 1829 by New Jersey and Pennsylvania volunteers.