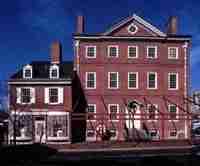 Called the “most genteel tavern in America” by John Adams, it was the favorite meeting place of many of the Founding Fathers and of many members of the First Continental Congress. The land on which City Tavern was built was conveyed in 1772 by Samuel Powell to a group of seven wealthy citizens. The City Tavern was built by subscription in 1773. It was partially destroyed by fire on March 22, 1834 and the structure was demolished in 1854.

The entire building was reconstructed in the 1970s and re-opened in 1976 for the United States Bicentennial as a functioning tavern and restaurant. On October 1, 2013, the tavern was temporarily ordered to close by the National Park Service, the building’s owner, as a result of the United States federal government shutdown of 2013.

City Tavern was featured in The Riddle of Penncroft Farm by Dorothea Jensen. In it, it was the place where Will spied on the British during their occupation of Philadelphia in 1777 while pretending to be an apprentice of Little Smith. “Little Smith” was, in real life, the name of its first owner.