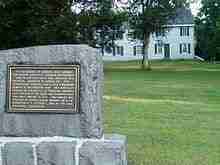 The Thomas Clarke House Museum was built in 1772 by the third generation of Quakers at Stony Brook. The house is furnished in the Revolutionary period and contains military artifacts and battle exhibits, as well as a research library. During the battle Hugh Mercer was brought to the Clarke House and treated unsuccessfully by Benjamin Rush.