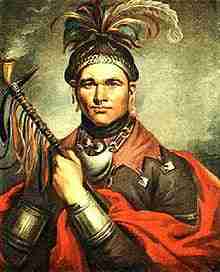 John Abeel, Jr. (ca. 1750s–February 18, 1836), known as Gaiänt’wakê (Gyantwachia – ″the planter″) or Kaiiontwa’kon (Kaintwakon – “By What One Plants”) in the Seneca language and thus generally known as Cornplanter, was a Seneca war chief and diplomat. As a war chief, Cornplanter fought in the French and Indian War and the American Revolutionary War. In both wars, the Seneca and three other Iroquois nations were allied with the British. After the war Cornplanter led negotiations with the United States and was a signatory of the Treaty of Fort Stanwix (1784). He helped gain Iroquois neutrality during the Northwest Indian War.

In the postwar years, he worked to learn more about European-American ways and invited Quakers to establish schools in Seneca territory. Disillusioned by poor treatment of his people by the Americans, he had the schools closed and renewed some Seneca ways. The United States government granted him about 1500 acres of former Seneca territory in Pennsylvania in 1796 for “him and his heirs forever”, which became known as the Cornplanter Tract. It was flooded in 1965 by the Kinzua Dam, and most remaining Seneca moved to Allegany Reservation.

He was the son of a Seneca mother, Aliquipiso, and a Dutch father, an Albany fur trader named Johannes “John” Abeel (last name sometimes Gaelicized to O’Bail). His Seneca name, Gaiänt’wakê (often spelled Gyantwachia), means “the planter,” and another variation, Kaintwakon, means “by what one plants.” He was born at Canawaugus (now in the Town of Caledonia) on the Genesee River in present-day New York State around 1750 and was raised by his mother with the Seneca. As the Seneca and other Iroquois nations had a matrilineal system of kinship, Cornplanter was considered to be born into his mother’s clan and gained his status from them.

Cornplanter first became known as war chief of the Seneca when they allied with the French against the English during the French and Indian War (part of the Seven Years War between the European nations). He was present at Braddock’s defeat.

During the American Revolution, both Cornplanter and his uncle, Chief Guyasutha, wanted the Iroquois to remain neutral. He believed the Iroquois should stay out of the white man’s war. “War is war,” he told other Iroquois. “Death is death. A fight is a hard business.”{citation needed|date=September 2012} Both the British and the American Patriots had urged the Iroquois nations to stay neutral.

Cornplanter joined forces with the Loyalist Lt. Colonel John Butler and his rangers at the 1778 Battle of Wyoming Valley in present-day Pennsylvania. They killed many settlers and destroyed their properties, in what became known in United States history as the Wyoming Valley Massacre.

Fighting on the frontier was fierce. Patriot forces under Colonel Thomas Hartley burned Tioga. In reprisal, Cornplanter and Joseph Brant participated in the 1778 Loyalist-Iroquois attacks led by Captain Walter Butler and Butler’s Rangers in Cherry Valley, New York, later known by the Americans as the Cherry Valley Massacre. During this campaign, Cornplanter’s men happened to capture his father Johannes Abeel after burning his house. Cornplanter, who had once gone as a young man to see Abeel, recognized him and offered apology. He invited Abeel to return with the Seneca or to go back to his white family. When his father chose the latter, Cornplanter had Seneca warriors accompany him in safety.{Citation needed|date=February 2007}

After the victories of the Loyalist and Iroquois forces, commander-in-chief General George Washington commissioned Major General John Sullivan to invade Six Nation territory throughout New York and destroy Iroquois villages. At the Battle of Newtown, Iroquois and British troops were decisively defeated. But Sullivan and his army of 5,000 men caused greater damage in their scorched earth campaign. They methodically destroyed Iroquois villages, farms, stored crops and animals between May and September 1779 throughout the Iroquois homeland (upstate and western New York). Cornplanter, along with Brant, Old Smoke, and Lt. Colonel John Butler, fought a desperate delaying action in order to allow the escape of many refugees, both Native and non-Native, who went to Canada. Surviving Iroquois suffered terribly during the following months in what they called “the winter of the deep snow.” Many froze or starved to death. Cornplanter and Seneca warriors continued to fight with the British against the Patriots, hoping to expel the colonists from their territory.

With Britain’s final defeat in the war, Cornplanter recognized the need for a positive diplomatic relationship with the fledgling government of what the Iroquois called the “Thirteen Fires.” He became a negotiator in disputes between the new “Americans” and the Seneca as well as other indigenous tribes. He was a signatory of the Treaty of Fort Stanwix (1784), and participated in later meetings with both presidents George Washington and Thomas Jefferson.

After the American Revolution, Native Americans west of the Allegheny Mountains mounted a resistance in the Northwest Indian War in Ohio and Indiana, hoping to repulse the Americans. Cornplanter kept the Iroquois neutral in this conflict. In addition, he tried to negotiate with the Shawnee on behalf of the U.S.

In 1790, Cornplanter and his brother Half-Town (also a chief) traveled to Philadelphia to meet with President George Washington and Pennsylvania Governor Thomas Mifflin; they were protesting the current treatment of their people. Cornplanter and Half-Town extracted an agreement from Washington and Mifflin to protect Iroquois land. [see: The speech of the Cornplanter …, December 1, 1790, at external links.]

Cornplanter made many trips to the cities to strengthen relationships and talk with those who were interested in his people. He tried to learn the ways of the European Americans, as he saw it necessary for future relations between the Haudenosaunee and Americans. He was impressed by the beliefs and practice of the Quakers. He invited them to educate his son and develop schools in Seneca territory. He and his half-brother, the religious leader Handsome Lake, strongly opposed liquor among the Seneca.

During the War of 1812, Cornplanter supported the American cause, convincing his people to do so as well. At one point he offered to bring two hundred warriors to assist the U.S., but his offer was refused.

He allowed Quakers into his village to help the Seneca learn new skills when they could no longer rely on hunting or the fur trade as a way of life. He also encouraged men to join the women working in the fields to help increase their farming economy.

Eventually, Cornplanter became disillusioned with his relationship with the Americans. To help fight the drunkenness and despair suffered by many Indians, his half-brother Handsome Lake preached that the Iroquois must return to the traditional way of life and take part in religious ceremonies. Cornplanter felt his people were poorly treated by the Americans. He heeded Handsome Lake’s prophecy that they should return to tradition and turn away from assimilation to white ways. He burned his military uniform, broke his sword, and destroyed his medals. He closed the schools but did not completely break relations with the Quakers; he retained a relationships of love and respect with them.

In gratitude for his assistance to the state, Cornplanter was given a grant of {convert|1500|acre|km2} by Pennsylvania in 1796 along the western bank of the Allegheny River (about three miles (5 km) below the southern boundary of New York state) to him and his heirs “forever”. By 1798, 400 Seneca lived on the land, which was called the Cornplanter Tract or Cornplanter Grant (Cayuga: Gyonǫhsade:gęh ). In 1821 Warren County, Pennsylvania tried to force Cornplanter to pay taxes for his land, which he protested on the basis that the land had been “granted” to him by the U.S. government. After much talk, the state finally agreed that the Cornplanter Tract was exempt.

Cornplanter was half-brother to Handsome Lake (Sganyadai:yo, ca. 1735-1815), a Seneca religious leader of the Iroquois. He was uncle to Governor Blacksnake (Thaonawyuthe, ca. 1760-1859), a Seneca war chief who, like Cornplanter, had an exceptionally long life for a man of his times. Artist Jesse Cornplanter was his last known direct descendant (1889–1957).

Cornplanter died on the Cornplanter Tract in 1836. He requested a grave with no marker. The monument which was installed over his grave by the State of Pennsylvania in 1866 “is believed to be first monument erected in honor of a Native American in the United States.” Hon. James Ross Snowden of Philadelphia gave the dedicatory address. Snowden said in part: He was a dauntless warrior and wisest statesman of his nation, the patriarch of this tribe and the peacemaker of his race. He was a model man from nature’s mould. Truth, temperance, justice and humanity, never had a nobler incarnation or more earnest and consistent advocate then he. As we loved him personally, and revere the nobel, manly character he bore, we erect this tribute to his memory, that those who live after us may know and imitate his virtues.

In 1965, the new Kinzua Dam at Warren, Pennsylvania permanently flooded all but a small corner of the Cornplanter Tract and created the Allegheny Reservoir. Cornplanter’s grave, including the Cornplanter Monument, was subsequently moved to higher ground, at the Riverview-Corydon Cemetery, located in Elk Township, Warren County, Pennsylvania. “The grounds are located west of the north central Pennsylvania town of Bradford, just about 100 yards from the New York state line. The cemetery contains what are believed to be the remains of Cornplanter, his descendants and residents of Corydon.” The State of Pennsylvania erected an honorary marker in 1966. Most of the Seneca moved to the Allegany Reservation in New York.

* The relocation of Cornplanter’s remains and gravesite figure in the song, “As Long As The Grass Shall Grow” that Johnny Cash recorded in 1964; it was originally written by Peter LaFarge.
* The Chief Cornplanter Boy Scout Council, headquartered in Warren, as well as their Order of the Arrow lodge, Gyantwachia Lodge #255 are named in his honor.
* Cornplanter State Forest in Forest County, Pennsylvania is also named for him and comprises {convert|1585|acre|km2} of land.
* “The Cornplanter Medal was introduced in 1901 by Frederick Starr … who had conducted research on the Iroquois Indians and wanted to give public acknowledgement to others who had contributed to the knowledge of the tribes. In order to help establish the medal, Starr and his colleagues raised money by selling a series of drawings of Indian life … [by] Jesse Cornplanter.”
* In 2008, The Kane Republican ran a Thanksgiving editorial titled “Giving Thanks for Cornplanter’s Legacy”.
* A 2009 newspaper column titled, “Cornplanter, can you swim?” proposed renaming Allegheny Reservoir to Cornplanter Lake.
* In 2011, the Center Street Bridge in Salamanca, NY was renamed the Chief Cornplanter (Gayetwage) Memorial Bridge.
* Cornplanter’s portrait is held in the collection of the New-York Historical Society in New York City.