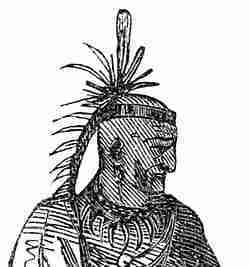 Cornstalk (Shawnee: Hokoleskwa) (ca. 1720 – November 10, 1777) was a prominent leader of the Shawnee nation just prior to the American Revolution. His name, Hokoleskwa, translates loosely into “stalk of corn” in English, and is spelled Colesqua in some accounts. He was also known as Keigh-tugh-qua and Wynepuechsika.

Cornstalk opposed European settlement west of the Ohio River in his youth, but he later became an advocate for peace after the Battle of Point Pleasant. His murder by American militiamen at Fort Randolph during a diplomatic visit in November 1777 outraged both American Indians and Virginians.

Historians believe he may have been born in present-day Pennsylvania, and with his sister, Nonhelema, moved to the Ohio Country, near present day Chillicothe, when the Shawnee fell back before expanding white settlement. Stories tell of Cornstalk’s participation in the French and Indian War, though these are probably apocryphal. His alleged participation in Pontiac’s Rebellion is also unverified, though he did take part in the peace negotiations.

Cornstalk played a central role in Dunmore’s War of 1774. After the 1768 Treaty of Fort Stanwix, settlers and land speculators moved into the lands south of the Ohio River in present-day Kentucky. Although the Iroquois had agreed to cede the land, the Shawnee and others had not been present at the Fort Stanwix negotiations. They still claimed Kentucky as their hunting grounds. Clashes soon took place over this. Cornstalk tried unsuccessfully to prevent escalation of the hostilities.

Attempting to block a Virginian invasion of the Ohio country, Cornstalk led a force of Shawnee and Mingo warriors at the Battle of Point Pleasant. His attack, although ferociously made, was beaten back by the Virginians. Cornstalk retreated and would reluctantly accept the Ohio River as the boundary of Shawnee lands in the Treaty of Camp Charlotte.

Cornstalk’s commanding presence often impressed American colonials. A Virginia officer, Col. Benjamin Wilson, wrote of Cornstalk’s speech to Lord Dunmore at Camp Charlotte in 1774: “I have heard the first orators in Virginia, Patrick Henry and Richard Henry Lee, but never have I heard one whose powers of delivery surpassed those of Cornstalk on that occasion.”

With the American Revolution began, Cornstalk worked to keep his people neutral. He represented the Shawnee at treaty councils at Fort Pitt in 1775 and 1776, the first Indian treaties ever negotiated by the United States. Many Shawnees nevertheless hoped to use British aid to reclaim their lands lost to the settlers. By the winter of 1776, the Shawnee were effectively divided into a neutral faction led by Cornstalk, and militant bands led by men such as Blue Jacket.

In the fall of 1777, Cornstalk made a diplomatic visit to Fort Randolph, an American fort at present-day Point Pleasant, seeking as always to maintain his faction’s neutrality. Cornstalk was detained by the fort commander, who had decided on his own initiative to take hostage any Shawnees who fell into his hands. When, on November 10, an American militiaman from the fort was killed nearby by unknown Indians, angry soldiers brutally executed Cornstalk, his son Elinipsico, and two other Shawnees.

American political and military leaders were alarmed by the murder of Cornstalk; they believed he was their only hope of securing Shawnee neutrality. At the insistence of Patrick Henry, the governor of Virginia, Cornstalk’s killers (whom Henry called “vile assassins”) were eventually brought to trial, but since their fellow soldiers would not testify against them, all were acquitted.

Cornstalk was originally buried at Fort Randolph. In 1840 his grave was found and the remains were moved to the Mason County Courthouse grounds. In 1954 the courthouse was torn down and he was reburied in Point Pleasant. Legends arose about his dying “curse” being the cause of misfortunes in the area (later supplanted by local “mothman” stories), though no contemporary historical source mentions any such utterance by Cornstalk.