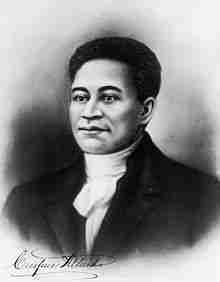 Crispus Attucks (c. 1723 – March 5, 1770) may have been an American slave or freeman, merchant seaman and dockworker of Wampanoag and African descent. He was the first casualty of the Boston Massacre, in Boston, Massachusetts, and is widely considered to be the first American casualty in the American Revolutionary War.

Little is known for certain about Crispus Attucks beyond that he, along with Samuel Gray and James Caldwell, died “on the spot” during the incident. Two major sources of eyewitness testimony about the Boston Massacre, both published in 1770, did not refer to Attucks as a black man or “Negro”; it appeared that Bostonians accepted him as mixed race. Historians disagree on whether Crispus Attucks was a free man or an escaped slave; but agree that he was of Wampanoag and African descent.

While the extent of his participation in events leading to the massacre is unclear, Attucks in the 18th century became an icon of the anti-slavery movement. He was held up as the first martyr of the American Revolution along with the others killed. In the early 19th century, as the abolitionist movement gained momentum in Boston, supporters lauded Attucks as a black American who played a heroic role in the history of the United States Because Attucks had Wampanoag ancestors, his story also holds special significance for many Native Americans.

He appears to have been born a slave from Framingham, Massachusetts during 1723, possibly on Hartford Street. Framingham had a small population of black inhabitants from at least 1716. Attucks was of mixed African and Native American parentage and was descended from John Attucks, of Massachusett who was hanged during King Philip’s War.

In 1750 William Brown, a slave-owner in Framingham, advertised for the return of a runaway slave named Crispus. Attucks’ status at the time of the massacre as either a free black or a runaway slave has been a matter of debate for historians. However, his descendants maintain he was a slave and ran away sometime in his teenage years.{citation needed|date=February 2013} What is known is that Attucks became a sailor and he spent much of the remainder of his life at sea often working on whalers which involved long voyages. He may only have been temporarily in Boston in early 1770, having recently returned from a voyage to the Bahamas. He was due to leave shortly afterwards on a ship for North Carolina./ref/Parr & Swope p. 45.[/ref]

In the fall of 1768, British soldiers were sent to Boston in an attempt to control growing colonial unrest, which had led to a spate of attacks on local officials following the introduction of the Stamp Act and the subsequent Townshend Acts. Radical Whigs had coordinated waterfront mobs against the authorities. The presence of troops, instead of reducing tensions, served to further inflame them.

After dusk on March 5, 1770, a crowd of colonists confronted a sentry who had chastised a boy for complaining that an officer did not pay a barber bill. Both townspeople and a company of British soldiers of the 29th Regiment of Foot gathered. The colonists threw snowballs and debris at the soldiers. Attucks and a group of men led by Attucks approached the Old State House armed with clubs. A soldier was struck with a piece of wood, an act some witnesses claimed was done by Attucks. Other witnesses stated that Attucks was “leaning upon a stick” when the soldiers opened fire.

Five colonists were killed and six were wounded. Attucks took two bullets in the chest and was the first to die. County coroners Robert Pierpoint and Thomas Crafts Jr. conducted an autopsy on Attucks. Attucks’ body was carried to Faneuil Hall, where it lay in state until Thursday, March 8, when he and the other victims were buried together in the same grave site in Boston’s Granary Burying Ground. He lived for approximately 47 years.

Arguing the soldiers fired in self-defense, John Adams successfully defended most of the accused British soldiers against a charge of murder. Two of the soldiers were found guilty of manslaughter. Faced with the prospect of hanging, the soldiers pled benefit of clergy, and were instead branded on their thumbs. In his arguments, Adams called the crowd “a motley rabble of saucy boys, negros and molattoes, Irish teagues and outlandish jack tarrs.”.” In particular, he charged Attucks with having “undertaken to be the hero of the night,” and with having precipitated a conflict by his “mad behavior.”

Two years later, Samuel Adams, a cousin of John Adams, named the event the “Boston Massacre,” and helped assure that it would not be forgotten. Boston artist Henry Pelham (half-brother of the celebrated portrait painter John Singleton Copley) created an image of the event. Paul Revere made a copy from which prints were made and distributed. Some copies of the print show a dark-skinned man with chest wounds, presumably representing Crispus Attucks. Other copies of the print show no difference in the skin tones of the victims.

The five who were killed were buried as heroes in the Granary Burying Ground, which also contains the graves of John Hancock and other notable figures. While custom of the period discouraged the burial of black people and white people together, such a practice was not completely unknown. Prince Hall, for example, was interred in Copp’s Hill Burying Ground in the North End of Boston 39.

* “First man to die for the flag we now hold high was a black man” is a line from Stevie Wonder’s song “Black Man”.
* “Crispus Attucks, the first blasted” is a line from Nas’s song “You Can’t Stop Us Now”.
* The poet John Boyle O’Reilly wrote the following poem when the monument was finally unveiled:

> And to honor Crispus Attucks who was the leader and voice that day: The first to defy, and the first to die, with Maverick, Carr, and Gray. Call it riot or revolution, or mob or crowd as you may, such deaths have been seeds of nations, such lives shall be honored for aye…

* Martin Luther King, Jr. referred to Crispus Attucks in the introduction of Why We Can’t Wait (1964) as an example of a man whose contribution to history provided a potent message of moral courage.
* In an unsourced, popular book about Attucks, James Neyland wrote his appraisal of the man’s significance:

* In the 4th season 30 Rock episode “Winter Madness”, character Tracy Jordan accuses a Bostonian John Hancock re-enactor of lying after claiming to have met Attucks at a Sons of Liberty meeting in 1775, five years after his death.
* In February 2012, Wayne Brady, J. B. Smoove, and Michael Kenneth Williams, as well as Keith David appeared in a satirical rap music video about Crispus Attucks.
* In Season 2 of Lizzie McGuire it is revealed that Lanny Onasis is a direct descendant of Crispus Attucks.