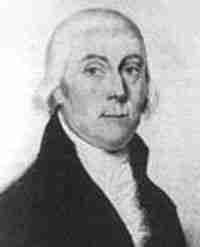 Cyrus Griffin (July 16, 1749{spaced ndash}December 14, 1810) was a lawyer and judge who served as the last President of the Continental Congress, holding office from January 22, 1788, to November 2, 1788. He resigned after the ratification of the United States Constitution rendered the old Congress obsolete, and was later a United States federal judge.

Griffin was born in Farnham, Virginia, in 1749. He was educated in England and in Scotland at the University of Edinburgh. While there Griffin married Christina Stewart, oldest daughter of John Stewart, the sixth Earl of Traquair (1699–1779). This was done via a secret elopement and escape through the hills of Scotland after the Earl had forbidden contact between Christina and Griffin after the suitor had announced his intentions. Estranged for many years, the Earl reconciled with his daughter via correspondence shortly before his death.

Griffin was engaged in the private practice of law in Lancaster, Virginia from 1774 to 1777. He was a member of the Virginia House of Delegates and a delegate to the Continental Congress from 1778 to 1781, and again from 1787 to 1788, serving as an appeals court judge in the interim. He served as President of Congress from January to November 1788, a mostly ceremonial position with no real authority. Some amateur historians later promoted Griffin and other Presidents of Congress as the original “Presidents of the United States”, but the offices are unrelated.

Griffin was president of the Supreme Court of the Admiralty from its creation until its abolition, and was commissioner to the Creek nation in 1789.

Griffin received a recess appointment from President George Washington on November 28, 1789, to a new seat on the United States District Court for the District of Virginia, created by 1 Stat. 73. Formally nominated on February 8, 1790, Griffin was confirmed by the United States Senate on February 10, 1790, and received his commission the same day. He served until his death (in Yorktown, Virginia) on December 14, 1810. He is buried next to his wife in the churchyard at Bruton Parish Church in Williamsburg, Virginia.