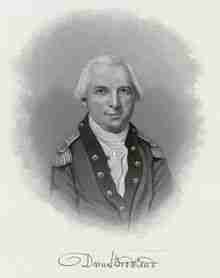 Daniel Brodhead IV (October 17, 1736 – November 15, 1809) was an American military and political leader during the American Revolutionary War and early days of the United States.

Brodhead was born in Marbletown, New York, the son of Daniel Brodhead III and Hester (Wyngart) Brodhead. Brodhead’s father moved his family to what is now East Stroudsburg, Pennsylvania, in 1737. Life in the frontier settlement was difficult, as Native American bands, mostly Lenape and Susquehannock, resisted settlers’ encroachment. The Brodhead homestead was attacked by natives numerous times during Daniel’s youth. When his father died in 1755, Brodhead was left with 150 acres from the estate. He sold his land share to brother Garret. This became the residence of the Flory family for many years at 81 North Courtland Street, the oldest home in East Stroudsburg. The home is now privately owned and renovated by Joel Smith.

Brodhead married Elizabeth Dupui (Dupuy) in April 1756. They had three children who survived to adulthood.

Brodhead had a relatively unremarkable career before the American Revolutionary War. He farmed, ran a grist mill, and worked as a deputy surveyor for Pennsylvania.

In the years leading up to the outbreak of hostilities, Brodhead began to take part in the protest movements against British taxation. In 1774, Brodhead was elected to represent Bucks County at a provincial meeting held in Philadelphia on July 15, 1774.

In 1776 as war broke out, Brodhead was commissioned as an officer of the 8th Pennsylvania Regiment of colonial troops with the rank of lieutenant colonel. His first action came at the Battle of Long Island, where he was recognized by George Washington for his bravery and initiative. At the battle, Brodhead’s only son, also named Daniel, was wounded and captured. He was soon exchanged, but died of his wounds shortly after being released.

Brodhead took over command of the 8th Pennsylvania after the death of its commander, Aeneas Mackay, and was promoted to colonel. Brodhead led his troops during the defense of Philadelphia in 1777 and wintered with the Continental Army at Valley Forge in 1777–79 In April 1778, Brodhead led a successful expedition against the Lenape bands around the Muskingum River in the Ohio Country. In June 1778, Washington sent Brodhead and the 8th Pennsylvania to rebuild and re-garrison the frontier outpost of Fort Muncy, in what is now Northumberland County, Pennsylvania. Brodhead defended local settlers from British-allied tribes.

The Wyandot, Mingo, Shawnee, and Lenape allied with the British and regularly raided settlements on the Ohio Country frontier. The British were strong at Fort Detroit and other outposts, and had most of the Iroquois Confederacy as allies. In addition, Brodhead faced a tenuous alliance with Iroquois tribes such as the Oneida, a large population of Tory-sympathizing settlers, and a delicate truce with the powerful Lenape-Delaware tribe. Its friendly chief had signed a treaty with the US as an ally.

From his headquarters at Fort Pitt, Brodhead directed numerous raids against hostile native tribes, often leading the expeditions personally. His most famous raid came against the Seneca tribe of the Iroquois Confederacy between August 11 and September 14, 1779. Brodhead left Fort Pitt with a contingent of 605 soldiers and militia to go into northwestern Pennsylvania. He followed the Allegheny River up into New York, where he drove the Seneca out of their villages. As most of the warriors were away fighting the Sullivan Expedition further east in New York, Brodhead met little resistance in destroying the villages, crops and people at the heart of the Seneca nation.

In 1781, some of the Lenape-Delaware ended their neutrality and sided with the British. In retaliation, Brodhead mounted the Coshocton Expedition, invading their territory in central Ohio and destroying the main village of Coshocton in what is now east-central Ohio. As a result of Brodhead’s campaign, the Delaware fled from eastern Ohio. They also vowed vengeance.

He retained command of the Western Department until September 17, 1781, when he was replaced by John Gibson. He had turned over command in May 1781, but returned in August and tried to regain control from Gibson, in the process arresting Gibson. However George Washington sent orders which led to Broadhead’s permanent removal from command at Fort Pitt. Broadhead was removed from his command over allegations of mishandling supplies and money. Brodhead had made impressment (the forced sale of supplies) a policy. He had spent money intended for bonuses to recruit new militiamen to purchase supplies for his existing troops. Brodhead was acquitted of all charges except misspending the recruiting money. George Washington had been aware of the impressment and had given his tacit approval, as the Continental Army was struggling to keep going. Furthermore, the court martial ruled Broadhead justified in spending the recruiting money on supplies, and he was not punished.

A short time later, George Washington brevetted him a brigadier general. Brodhead spent the remainder of the war as commander of the 1st Pennsylvania Regiment.

After the war, Brodhead, by then a widower, married Rebecca Mifflin, the widow of General Samuel Mifflin. Brodhead was one of the founders of the Society of the Cincinnati. He later served in the Pennsylvania General Assembly. On November 13, 1789, he was appointed Surveyor General of Pennsylvania and held the post for the next eleven years.

He died at Milford, Pike County, Pennsylvania, and was buried in Milford.