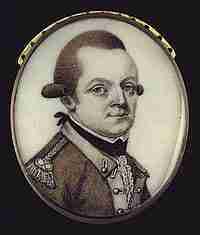 Christian Daniel Claus (1727–1787) was a commissioner of Indian affairs and a prominent Loyalist during the American Revolution.

He was born September 13, 1727 at Bönnigheim, Württemberg the son of Adam Frederic Claus and his wife Anna Dorothea. He arrived in America in 1749. In 1755 he was made a lieutenant in the Indian department and a deputy secretary of Indian affairs.

He had lived with Joseph Brant and the Mohawks for a while and could speak their language.

In September 1775, he was replaced as the deputy superintendent by Major John Campbell. In November, Daniel Claus sailed to London to appeal his case before the British Lords. He was given the post of deputy confined to working with the Iroquois refugees in Canada. In August, 1777, he was appointed as agent of the Six Nations Indians by Frederick Haldimand.