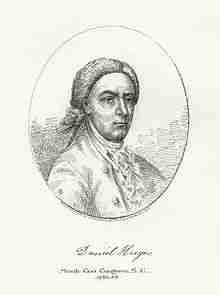 Daniel Huger (February 20, 1742 – July 6, 1799) was an American planter and statesman from Berkeley County, South Carolina. His grandfather was Daniel Huger Sr (1651–1711), a French Huguenot who was born in Loudun, France and settled in Charleston, South Carolina. Daniel Huger was a delegate for South Carolina to the Continental Congress from 1786 to 1788 and a United States Representative from 1789 to 1793. His son, Daniel Elliott Huger, would later serve in the United States Senate for South Carolina and marry a daughter of Arthur Middleton. A granddaughter of Daniel Elliot Huger (Mary Procter Huger) was the wife of Confederate General Arthur Middleton Manigault, who was of Huguenot descent himself; likewise a nephew of Daniel Elliot Huger was Confederate General Benjamin Huger.

Daniel Huger’s wife was the sister of the wife of Lewis Morris, Jr., the son of New York Congressman Lewis Morris.