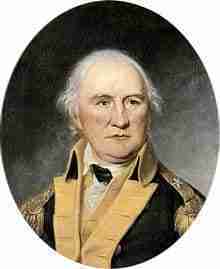 David Morgan was a famous frontiersman in what is now the state of West Virginia. He was the third child of Morgan Morgan, traditionally stated to be the first white settler in West Virginia. David was a friend of George Washington and Patrick Henry.

He participated in many battles of the Revolutionary War and helped defend Fort Duquesne. A younger brother Zackquill (Zackwell) Morgan founded Morgantown, West Virginia which is the town where West Virginia University is located.

In 1745, he built a log cabin at Bunker Hill, West Virginia and resided there until 1772, when he moved to Marion County, West Virginia. Now known as the Morgan-Gold House, it was listed on the National Register of Historic Places in 1985.