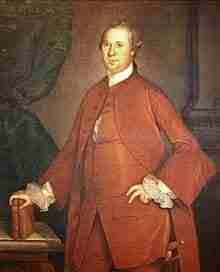 Daniel of St. Thomas Jenifer (1723 – November 16, 1790) was a politician and a Founding Father of the United States. Born long before conflicts with Great Britain emerged, he was a leader for many years in Maryland’s colonial government. However, when conflict arose with Great Britain, he embraced the Patriot cause.

Jenifer, born at Coates Retirement (now Ellerslie), an estate west of Port Tobacco in Charles County, Maryland, was the son of a colonial planter of Swedish and English descent. As a young man, he acted as a receiver-general, the local financial agent for the last two proprietors of Maryland.

Jenifer served as justice of the peace for Charles County and later for the western circuit of Maryland. He sat on a commission that settled a boundary dispute between Pennsylvania and Maryland (1760) and on the Governor’s Council, the upper house of the Maryland legislature that also served as the colony’s court of appeals and as a board of senior advisers to the governor (1773–76).

Despite his close ties with the colonial government, Jenifer strongly resented what he and most of the colonial gentry saw as Parliament’s arbitrary interference with the colonies’ affairs, especially its laws concerning taxation and trade regulation. Years before the struggle for independence began, he had defended the proprietors of Maryland against those who sought to make Maryland a Royal colony. When the Revolution came, Jenifer lent his considerable support as a wealthy landowner to the Patriot cause, despite the fact that many leading Patriots had been his enemies in the proprietorship struggle. Jenifer became the president of Maryland’s Council of Safety, the Patriot body established to organize Maryland’s military forces for the Revolution (1775–77). When, in 1776, a new constitution was framed for the state of Maryland, Jenifer commented on the document’s neglect of popular sovereignty: “The Senate does not appear to me to be a Child of the people at Large, and therefore will not be Supported by them longer than there Subsists the most perfect Union between the different Legislative branches.”

During and after the war, Jenifer became increasingly concerned about national affairs. He represented his state in the Continental Congress (1778–82) while simultaneously serving as president of Maryland’s first senate (1777–80). As manager of his state’s finances between 1782 and 1785, Jenifer drew on his experiences as a landholder to help the state survive the critical postwar economic depression. Along with James Madison, John Dickinson, George Mason and his good friend George Washington, Jenifer began to explore ways to solve the economic and political problems that had arisen under the weak Articles of Confederation. Consequently, he attended the Mount Vernon Conference, a meeting that would lead eventually to the Constitutional Convention.

Like his old friend Benjamin Franklin, Jenifer enjoyed the status of elder statesman at the Convention, which took place from May 25 to September 17, 1787, in Philadelphia, Pennsylvania. Jenifer, one of Convention’s oldest delegates like Franklin, used his prestige (as well as humor and reputation as pleasant company) to work for a strong and permanent union of the states by reconciling opposing views and formulating the compromises that made the Convention a success.

Jenifer took stands on several important issues, although his advanced age restricted his activity in the day-to-day proceedings. Business experience gained while managing a large plantation had convinced him that an active central government was needed to ensure financial and commercial stability. To that end, Jenifer favored a strong and permanent union of the states in which a Congress representing the people had the power to tax. Concerned with continuity in the new government, he favored a three-year term for the United States House of Representatives. Too frequent elections, he concluded, might lead to indifference and would make prominent men unwilling to seek office. Jenifer was outvoted on this point, but his reaction was to marvel at the delegates’ ability to come to agreement on a plan of government: “The first month we only came to grips, and the second it seemed as though we would fly apart forever, however we came as close as friends of eighty years in but days.” {citation needed|date=November 2013} When Maryland’s other delegate, Luther Martin, said that he feared being hanged if the people of Maryland approved the Constitution, Jenifer quipped that Martin should stay in Philadelphia, so that he would not hang in his home state.{citation needed|date=November 2013}

After the Convention, Jenifer retired to Stepney, his great plantation near Annapolis, where he died in 1790. He may be buried at Ellerslie, the plantation at which he was born, and now on the National Register of Historic Places.

In his will, Jenifer passed his roughly {convert|16000|acre|km2|0|sing=on} land holdings to his nephew, Daniel Jenifer, and instructed that all his slaves be freed six years after his death. The following year the younger Jenifer had a son, who was named after his great-uncle, Daniel Jenifer like his uncle also served as magistrate in Charles County, as well as three terms in the U.S. House of Representatives. His family home, Retreat, also located in Charles County, Maryland near one of the largest slave-trading ports of the era Port Tobacco (which exported Maryland slaves once the trans-Atlantic trade became illegal in 1808), was built in the last quarter of the 18th century and is listed on the National Register of Historic Places.

Jenifer Street in Madison, Wisconsin is named in honor of this elder Jenifer.