Daniel Roberdeau (1727 – January 5, 1795) was an American merchant residing in Philadelphia, Pennsylvania at the time of the American War of Independence. He represented Pennsylvania from 1777 to 1779 in the Continental Congress. Roberdeau served as a brigadier general in the Pennsylvania state militia during the war. He was a signer of the Articles of Confederation.

Roberdeau was born in 1727 on the Island of St. Christopher in the West Indies. His father was a Huguenot immigrant named Isaac Roberdeau; his mother, a Scot, Mary Cunningham. After the death of his father, he immigrated to Philadelphia with his mother and sisters. Roberdeau became a timber merchant and, for a number of years, served on the Board of Managers for a hospital in Philadelphia.{Citation needed|date=December 2007}

Roberdeau was active in establishing Freemasonry in Philadelphia, which brought him to the attention of Benjamin Franklin and other civic leaders. He was elected to the Pennsylvania Colonial Assembly, serving from 1756 to 1760, but then declined further service.

When war neared, he joined the Associators (as the Pennsylvania rebel militia was known), and was made colonel of his regiment. In May 1776 he presided at several public meetings calling for the existing Pennsylvania delegation to the Continental Congress to be replaced with members who supported a Declaration of Independence. As a result, he was named to the Committee of Safety, and on July 4, 1776 was named a brigadier general in the state militia.

Roberdeau was first elected to the Continental Congress in February 1777 and served there until 1779. Later that year, when the Continental Army entered winter quarters at Valley Forge, he worked with General Washington to set up a militia support network known as the Flying Camp, and served as its commander.

In April 1778, Roberdeau took a short leave from Congress. He had noted the shortage of powder and shot in the army, and used the time off to establish a lead mine in Bedford County. To protect the mine and camp from Indian attacks, he built a palisade, Fort Roberdeau, at his own expense. Historically, Roberdeau’s fort was known as the “Lead Mine Fort”. It has been reconstructed near its original site in Sinking Valley (near present day Altoona, Blair County, Pennsylvania.{Citation needed|date=December 2007}

After the war he moved to Alexandria, Virginia, and eventually settled in Winchester, where he died in 1795. He is buried in the Mt. Hebron Cemetery there. His son, Isaac Roberdeau, became a civil engineer and U.S. Army officer, who helped Pierre L’Enfant lay out the plan for Washington, D.C. 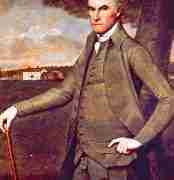