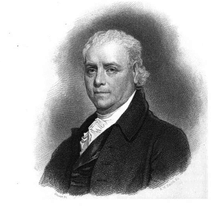 Born in Attleboro, Massachusetts on September 14, 1748, Cobb graduated from Harvard College in 1766. He studied medicine in Boston and afterward practiced in Taunton, Massachusetts. He was a member of the Massachusetts Provincial Congress in 1775; lieutenant colonel of Jackson’s regiment in 1777 and 1778, serving in Rhode Island and New Jersey; was aide-de-camp on the staff of General George Washington; appointed major general of militia in 1786 and rendered conspicuous service during Shays’ Rebellion.

Cobb moved to Gouldsboro in the district of Maine in 1796 and engaged in agricultural pursuits; elected to the Massachusetts Senate from the eastern district of Maine in 1802 and served as president; elected to the Massachusetts Governor’s Council in 1808; Lieutenant Governor of Massachusetts in 1809; member of the board of military defense in 1812; chief justice of the Hancock County (Maine) court of common pleas; returned in 1817 to Taunton, where he died on April 17, 1830. His remains were interred in Plain Cemetery.

In 1976, David Cobb was honored by being on a postage stamp for the United States Postal Service.