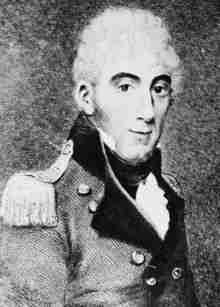 Colonel David Collins (3 March 1756 – 24 March 1810) was the first Lieutenant Governor of the Colony of Van Diemens Land, founded in 1804, which in 1901 became the state of Tasmania in the Commonwealth of Australia.

Collins was born in London, the third child of Henrietta Fraser and Royal Marines officer Arthur Tooker Collins (A Compendium of Irish Biography (1878), states he was born in County Offaly, then King’s County). His paternal grandfather was the historian Arthur Collins. David went to Exeter Grammar School before joining the Royal Marines as an Ensign at the age of 14. He was promoted second lieutenant on 20 February 1771. He was serving aboard HMS Southampton when Queen Matilda of Denmark was dramatically rescued.

Collins went to North America early in 1775, and fought at the Battle of Bunker Hill, where the British suffered heavy casualties, but held the heights of Charlestown. He was promoted to first lieutenant the following week.

By November 1776, he was stationed at Halifax, Nova Scotia, where he met and then married Mary (Maria Stuart) Proctor, the daughter of Captain Charles Proctor, on 13 June 1777.

He was promoted captain-lieutenant in August 1779, and outright captain by July 1780. In February 1781, he joined the HMS Courageux in the Channel Squadron, but did not enjoy being at sea. After three years on half-pay stationed at Chatham, he sailed on the First Fleet and on 20 January 1788, he became one of the founders of the penal colony of New South Wales at Port Jackson, now Sydney, as the new colony’s first judge advocate. Collins was responsible, under the governor, for the colony’s entire legal establishment. He issued all writs, summonses and processes, retained certain fees, and with one other justice of the peace formed the bench of magistrates.

In June or July 1788, Governor Phillip appointed Collins as the Secretary to the Governor, or Secretary to the Colony as the position was sometimes called. For the next eight years, quietly and efficiently, he was the indispensable aide to the officer administering the Government of New South Wales.

Collins also established the first, short-lived settlement in what is now the state of Victoria at Sullivan Bay on Port Phillip in 1803. He sailed from England in April aboard {HMS|Calcutta|1795|6}, arriving at Port Phillip in October. After landing at Sullivan Bay near present-day Sorrento, he sent First Lieutenant James Hingston Tuckey of the Calcutta to explore Port Phillip. Tuckey’s report and his own dissatisfaction with the site chosen prompted him to write to Governor King seeking permission to remove the settlement. When King agreed, Collins decided to move to the Derwent River. He arrived there in February 1804 on the Ocean and established the future town of Hobart.

Collins left no published account of his work as Lieutenant-Governor at Port Phillip nor later as the founder of Hobart.

Collins has given his name to Collinsvale in Tasmania, Collins Street, Melbourne, and Collins Street, Hobart, Tasmania. At Exeter Grammar School, now known as Exeter School, where he was educated, there is a house named after him.