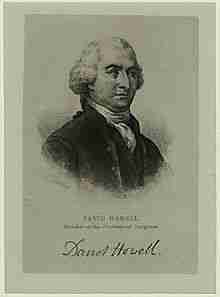 He was appointed by Thomas Jefferson in 1801 as United States Attorney, and On November 13, 1812, Howell was nominated by President James Madison to a seat on the United States District Court for the District of Rhode Island vacated by David L. Barnes. Howell was confirmed by the United States Senate on November 16, 1812, and received his commission the following day. He served on the federalist (pro-Constitution) committee which negotiated an end to William West’s armed anti-federalist protest on July 4. 1788. Howell served until his death, in 1824, in Providence.