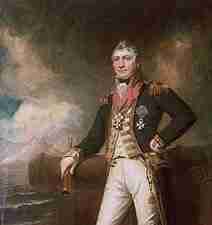 Born in Musselburgh, East Lothian, Scotland, he entered the Royal Navy as a midshipman in 1779. He served in the West Indies from 1779 to 1783, seeing action in the Caribbean during the American Revolutionary War and in Lord Howe’s final relief of the French and Spanish siege of Gibraltar in 1782. From 1783 to 1793, he served in the East Indies. Promoted to commander, he defeated a French division off Puerto Rico on 5 June 1795, and, in 1796, he participated in the capture of the Dutch colonies of Demerara, Essequibo and Berbice, becoming the British governor of Netherlands Guiana. He continued to fight against the French in Santo Domingo, from 1797 to 1799, and, in 1800, he captured the French frigate La Vengeance off the coast of Africa.

On 14 June 1814, he was promoted to Rear-Admiral. He served as second-in-command of the fleet sent to bombard Algiers in 1816. The Dutch king awarded him the commander’s cross of the coveted Military Order of William for his distinguished conduct. In May 1816, he was appointed to command the North American Station, living in Halifax, Nova Scotia and Bermuda. In 1818, he was nominated a knight of the Neapolitan Order of St Januarius, and he returned to the United Kingdom in 1819. In 1820, he was briefly Member of Parliament for Berwick-upon-Tweed.

In 1825, he became a Vice-Admiral. In 1842, he was appointed Commander-in-Chief, Plymouth. He died at sea 5 May 1845 while returning to Scotland from Plymouth, after more than sixty years’ service in the Royal Navy. He is buried with his first wife in the churchyard at Inveresk.

On 16 April 1804, he was married to Grace Purves, eldest daughter of Sir Alexander Purves, 5th Baronet, of Purves, by his second wife Mary Home, daughter of Sir James Home, 3rd Baronet of Coldinghame. Their children included advocate and geologist David Milne-Home and Admiral of the Fleet Sir Alexander Milne, 1st Baronet. His wife died at Bordeaux, in France, on 4 October 1814, where she had gone for the recovery of her health. The admiral brought her body back to the United Kingdom, and she was buried at Inveresk, East Lothian, Scotland, 18 February 1815. On 28 November 1819, Agnes Stephen.

Milne Land, in East Greenland, was named after him by Captain William Scoresby.