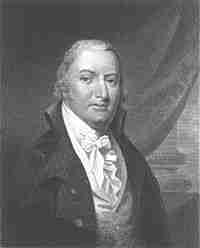 David Ramsay (April 2, 1749{spaced ndash}May 8, 1815) was an American physician, public official, and historian from Charleston, South Carolina. He was one of the first major historians of the American Revolution. During the Revolution he served in the South Carolina legislature until he was captured by the British. After his release he served as a delegate to the Continental Congress in 1782–1783 and again in 1785–1786. Afterwards he served in the state House and Senate until retiring from public service. He was murdered in 1815 by a mentally ill man whom Ramsay had examined as a physician.

The son of an Irish emigrant, he was born in Lancaster County, Pennsylvania. He graduated at Princeton University in 1765, received his medical degree at the University of Pennsylvania in 1773, and settled as a physician at Charleston, where he had a large practice. His brother was Congressman Nathaniel Ramsey, a brother-in-law of Charles Willson Peale.

Ramsay married Sabina Ellis (b.1753) in 1775; she died the following year. In 1783 he married Frances Witherspoon (b.1759), daughter of John Witherspoon, signer of the Declaration of Independence and president of the College of New Jersey. Frances died a year after their marriage. In 1787 Ramsay married Martha Laurens (1759-1811), daughter of Charleston-born Huguenot merchant, planter, and Revolutionary War statesman, Henry Laurens. Ramsay was also related (by marriage) to South Carolina Governor Charles Pinckney, Ralph Izard, John Rutledge, Arthur Middleton, Daniel Huger and Lewis Morris.

During the American Revolutionary War he was, from 1776 to 1783, a member of the South Carolina legislature. When Charleston was threatened by the British in 1780, he served with the South Carolina militia as a field surgeon. After the city was captured in 1780, Ramsay was imprisoned for nearly a year at St. Augustine, Florida, until he was exchanged. From 1782 to 1786 he served in the Continental Congress. In the absence of John Hancock, Ramsay served as chairman of Congress, from November 23, 1785 to May 12, 1786. In the 1790s he served three terms in the South Carolina State Senate, and was president of that body.

In his own day, Ramsay was better known as a historian and author than as a politician. He was one of the American Revolution’s first major historians. Ramsay writes with the knowledge and insights acquired by being personally involved in the events of the American Revolution. In 1785 he published in two volumes History of the Revolution of South Carolina (this was the first book to receive a copyright in the United States), in 1789 in two volumes History of the American Revolution, in 1807 a Life of Washington, and in 1809 in two volumes a History of South Carolina. In 1789 he also wrote A Dissertation on the Manners of Acquiring the Character and Privileges of a Citizen. Ramsay was also the author of several minor works, including a memoir (1812) of his third wife Martha Laurens Ramsay, a well-educated woman who had served as a political hostess for her father, Henry Laurens, during the 1780s.

Messer (2002) examines the transition in Ramsay’s republican perspective from his History of the American Revolution (1789) to his more conservative History of the United States (1816–17). His works went from a call for active citizens to reform and improve societal institutions to a warning of the dangers of an overzealous population and the need to preserve existing institutions. In his discussion of the treatment of Indians and African American slaves he became less critical of whites and changed to reflect the views of society at large. Ramsay’s increasing involvement in South Carolina’s economic and political institutions and the need for stability that defined early-19th-century nationalism influenced this transformation. O’Brien (1994) argues his 1789 History of the American Revolution was one of the first and most accomplished histories to appear in the aftermath of that event. She says it challenges American exceptionalist literary frameworks by presenting itself within the European Enlightenment historical tradition, reflecting Ramsay’s belief that the United States would have no historical destiny beyond typical patterns of European political and cultural development. Epic portrayals of American history in the 19th century were more the product of New England’s historiographic traditions coupled with German historical thought, treating national character as a historical agent, rather than a historical result, as Ramsay suggests. Ramsay’s history, then, is better considered the last of the European Enlightenment tradition than the first of American historical epics.

Ramsay’s History of the United States in three volumes was published posthumously in 1816–1817, and forms the first three volumes of his Universal History Americanized, published in twelve volumes in 1819.

Ramsay was appointed by a court to examine one William Linnen, a tailor known for serial litigation and nuisance suits, after Linnen had attempted to murder his attorney. Ramsay reported to the court that Linnen was “deranged” and that it would be “dangerous to let him go at large.” After apparently regaining his sanity, Linnen was released; though he threatened Ramsay, the latter did not take the threat seriously. At 1 p.m. on May 6, 1815, Ramsay passed Linnen on Broad Street in Charleston and was shot twice in the back and hip after Linnen removed a “horseman’s pistol” he had concealed in a handkerchief. According to a contemporary source: “Having been carried home, and being surrounded by a crowd of anxious citizens, after first calling their attention to what he was about to utter, he said ‘I know not if these wounds be mortal; I am not afraid to die; but should that be my fate, I call on all here present to bear witness, that I consider the unfortunate perpetrator of this deed a lunatic, and free from guilt.'” Ramsay died at 7 a.m. on May 8, 1815. He was buried at the Circular Congregational Church in Charleston, SC.