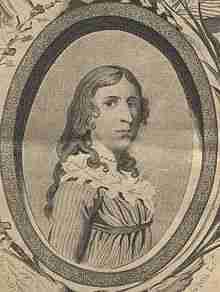 Deborah Sampson Gannett (December 17, 1760 – April 29, 1827), better known as Deborah Sampson, was an American woman who disguised as a man in order to serve in the Continental Army during the American Revolutionary War. She is part of a small number of women with a documented record of military combat experience in that war. She served 17 months in the army, as “Robert Shurtlieff” of Uxbridge, Massachusetts, was wounded in 1782 and honorably discharged at West Point, New York in 1783.

Deborah Sampson was born in the town of Plympton, Massachusetts, on December 17, 1760. She was the oldest of seven children born to Jonathan and Deborah Bradford Sampson, both of old Colonial stock. Her mother was a descendant of William Bradford, once Governor of Plymouth Colony. Her siblings were Jonathan, Elisha, Hannah, Ephraim, Nehemiah, and Sylvia. The family lived in Middleborough, Massachusetts, during her youth. Her family was poor, and when Jonathan Sampson abandoned them, Deborah became an indentured servant. Jonathan Sampson told the family that he was going to England. However, some sources say that he instead sailed to Maine and died in a shipwreck. This was later disproved, as he was enumerated in U.S. Census records as having started a new life in Lincoln County, Maine, with his common-law wife, a woman named Martha (nicknamed “Patty”), with whom he had at least 3 additional children. Jonathan Sampson enlisted in the Revolutionary War on 18 July 1775 from the town of Bowdoinham, then in Lincoln County, Maine. He died a pauper, having lost his land when it was granted to someone else. The town of Fayette paid poor relief to Jonathan and his wife, notifying the town of Duxbury to claim them.

Deborah lived in several different households: first with a spinster, then with the widow of Reverend Peter Thatcher, and finally, in 1770, she ended up an indentured servant in a farm which was owned by Deacon Jeremiah and Susanna Thomas. There she lived from the age of 10 to 18.

In 1778, she had the idea of enlisting in the army as a Continental soldier. Women were not allowed to do this, so she disguised herself as a man. She had little difficulty passing as a man because she was five feet seven inches in height, which was tall for a woman at the time. On May 20, 1782, she successfully enlisted in the army on the muster of Master Noah Taft of Uxbridge, under the name of her deceased brother, Robert Shurtlieff Sampson, and gave his/her residence as Uxbridge, Massachusetts. Her signature still exists in the Massachusetts records.

Sampson fought in several skirmishes. During her first battle, on July 3, 1782, outside Tarrytown, New York, she received two musket balls in her thigh and an enormous cut on her forehead. She begged her fellow soldiers to let her die and not take her to the hospital, but they refused to abandon her. A soldier put her on his horse, and they rode six miles to a hospital. The doctors treated her head wound, but she left the hospital before they could attend to the musket balls. Fearful that her true identity would be discovered, she removed one of the balls herself with a penknife and sewing needle, but her leg never fully healed because the other musket ball was too deep for her to reach. On April 1, 1783, she was promoted and spent seven months serving as a waiter to General John Paterson. This job entitled her to a better quality of life, better food, less danger, and shelter.

After the Treaty of Paris (1783) was signed, everyone thought the war was over. However, on June 24, the President of Congress ordered George Washington to send a fleet of soldiers to Philadelphia, Pennsylvania, to aid in squelching a rebellion of several American officers. During the summer of 1783, Sampson came down with malignant fever and was cared for by a doctor, Barnabas Binney. He removed her clothes to treat her and discovered the cloth she used to bind her breasts and, thus, discovered her secret. He did not betray her; he took her to his house, where his wife and daughters housed and took care of her.

After Sampson recovered, she returned to the army, but not for long. In September 1783, peace was assured through the signing of the Treaty of Paris. November 3 was the date for the soldiers to be sent home. When Dr. Binney asked her to deliver a note to General John Paterson, she thought that her secret was out. However, General Henry Knox never uttered a word; instead, she received an honorable discharge from the service, a note with some words of advice, and a sum of money sufficient to cover her expenses home. On October 25, 1783, General Knox honorably discharged her from the Army at West Point, after a year and a half of service.

Eight years later, in January 1792, Sampson petitioned the Massachusetts State Legislature for pay which the army had withheld from her because she was a woman. Her petition passed through the Senate and was approved, then signed by Governor John Hancock. The General Court of Massachusetts verified her service and wrote that she “exhibited an extraordinary instance of female heroism by discharging the duties of a faithful gallant soldier, and at the same time preserving the virtue and chastity of her sex, unsuspected and unblemished”. The court awarded her a total of 34 pounds.

Ten years later, in 1802, Sampson began giving lectures about her experiences in the army. These speeches were initiated because of her financial needs and a desire to justify her enlistment. But even with these speaking engagements, she was not making enough money to pay her expenses. She had to borrow money from her family and from her friend Paul Revere on many occasions. The soldiers in the Continental Army had received pensions for their services, but Sampson did not because she was female.

In 1804, Paul Revere wrote to Massachusetts Representative William Eustis on Sampson’s behalf. Revere requested that Congress grant her a military pension. This had never before been requested by or for a woman, but with her health failing and her family destitute, the money was greatly needed. Revere wrote, “I have been induced to enquire her situation, and character, since she quit the male habit, and soldiers uniform; for the more decent apparel of her own gender…humanity and justice obliges me to say, that every person with whom I have conversed about her, and it is not a few, speak of her as a woman with handsome talents, good morals, a dutiful wife, and an affectionate parent.” On March 11, 1805, Congress in Washington obliged the letter, and placed her on the Massachusetts Invalid Pension Roll. This pension plan paid her four dollars a month.

On February 22, 1806, she found herself in even more financial trouble, so she wrote once more to Revere asking for a loan of ten dollars. Part of her letter read, “My own indisposition and that of my sons causes me again to solicit your goodness in our favor though I, with Gratitude, confess it rouses every tender feeling and I blush at the thought of receiving ninety and nine good turns as it were, my circumstances require that I should ask the hundredth.” He sent the ten dollars.

In 1809, she sent another petition to Congress, asking that her pension as an invalid soldier, given to her in 1804, commence with the time of her discharge, in 1783. Had her petition been approved, she would have been awarded $960, to be divided into $48 a year for twenty years. However, it was denied until 1816, when her petition came before Congress again. This time, they approved her petition, awarding her $76.80 a year. With this amount, she was able to repay all her loans and take better care of the family farm. She died on April 29, 1827 at the age of 66 of Yellow fever and was buried in Rock Ridge Cemetery in the town of Sharon, Massachusetts.

Her long and ultimately successful public campaign for the American Revolutionary War pension bridged gender differences in asserting the sense of entitlement felt by all of the veterans who had fought for their country.