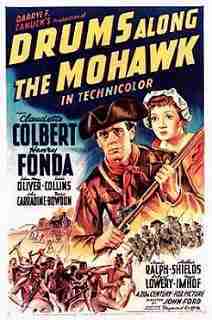 In 1776, American colonists Gilbert Martin (Henry Fonda) and Lana Borst (Claudette Colbert) marry and leave her luxurious home in Albany, New York for a small farm in Deerfield on the western frontier of the Mohawk Valley in central New York. Lana has difficulty in adjusting to frontier life, but soon is working alongside her husband.

The American Revolution begins. Lana is pregnant and miscarries when the Martin farm is burned to the ground in an Indian attack led by a Tory, Caldwell (John Carradine). With no home and winter approaching, the Martins accept work on the farm of wealthy widow Mrs. McKlennar (Edna May Oliver).

Life returns to peaceful normality; Mrs. McKlennar and the Martins prosper. However, an attack by Tories and Indians threatens the valley, and the militia is called up. Ambushed en route to attack the enemy, the force of militia and Continentals barely manage to defeat the enemy at Oriskany. Gil returns home wounded and delirious. Lana is again pregnant, and while Gil recovers from his wounds, she gives birth to their son.

The Tories and Mohawks attack German Flatts, and the settlers take refuge in Fort Herkimer. Mrs. McKlennar is mortally wounded, and ammunition runs short. Gil makes a dash through enemy lines to secure help from nearby Fort Dayton. As the Indians scale the walls of the fort, reinforcements arrive from Fort Dayton. The Indians are overwhelmed. After the battle, the settlers learn the revolution has ended, and the American flag is unfurled above the fort.

Frank S. Nugent reviewed the film for the New York Times of November 4, 1939 and wrote, “Walter D. Edmonds’s exciting novel of the Mohawk Valley during the American Revolution has come to the…screen in a considerably elided, but still basically faithful, film edition bearing the trademark of Director John Ford…It is romantic enough for any adventure-story lover. It has its humor, its sentiment, its full complement of blood and thunder…a first-rate historical film, as rich atmospherically as it is in action…Mr. Fonda and Miss Colbert have done rather nicely with the Gil and Lana Martin…Miss Oliver could not have been bettered as the warlike Widow McKlennar…Mr. Shields’s Rev. Rosenkrantz…Mr. Imhof’s General Herkimer, Mr. Collins’s Christian Reall, Spencer Charters’s landlord, Ward Bond’s Adam Helmer…They’ve matched the background excellently, all of them.”