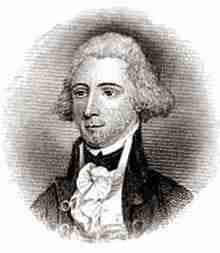 Ebenezer Denny (March 11, 1761 – July 21, 1822) was a soldier during the American Revolutionary War whose journal is one of the most frequently quoted accounts of the surrender of the British at the siege of Yorktown. Denny later served as the first Mayor of Pittsburgh, from 1816 to 1817.

Denny was born in Carlisle, Pennsylvania, on March 11, 1761, the eldest son of William and Agnes Parker Denny. At the age of 13 he was entrusted to carry dispatches across the Allegheny Mountains by the commandant at Fort Pitt. He crossed alone often; to conceal his presence he hid in the woods at night. At one point he was chased into Fort Loudon by the Indians. He then entered into employment for his father’s shop in Carlisle. Upon learning that a letter of the marque, a privateer ship, was to sail from Philadelphia for the West Indies, he shipped as a volunteer. He was promoted to command the quarter-deck for his gallantry in numerous sea fights.

This transpired during 1781 as the Continental Army marched south to face Cornwallis at Yorktown, Virginia, at which time the end of the long war for independence drew close. Near Williamsburg, Virginia, the regiment had a successful encounter against British forces, the partisan Simcoe. Denny in his famous military journal states, “Here for the first time saw wounded men; the sight sickened me.”

As the Continental Army closed around the British stronghold at Yorktown, Captain Denny described the scene, “Army encamped on the banks of the James River; part of the French fleet in full view.”

> His journal entry dated September 14, 1781, continues into further detail of the encampment:
> General Washington Arrived; our brigade was paraded to receive him. Officers all pay their respects. He stands in the door, takes every man by the hand; the offices all pass in, receiving his salute, and shake hands. This is the first time I have seen the General.

> October 15, 1781, the siege at Yorktown begins:
> Siege operations were at once commenced; the fighting became very warm on all sides, and the siege works were pushed with great vigor. Easy digging. light, sandy soil. A shell from one of French mortars set fire to a British frigate; she burned to the water’s edge and then blew up; made the earth shake.

> October 17, 1781, The Surrender of Cornwallis:
> Had the pleasure of seeing a drummer mount the enemy’s parapet and beat a parley and immediately an officer, holding up a white handkerchief, made his appearance. An officer from our line ran and met him and tied the handkerchief over his eyes, and thus was the great event of the surrender of Cornwallis accomplished.

Denny was an officer in the First American Regiment and was active in the Northwest Indian War. He participated in the 1790 Harmar Campaign and served as aide-de-camp to Major-General Arthur St. Clair at St. Clair’s Defeat. Denny kept a journal, which is considered an important primary document of the two campaigns. Following the battle, Lt. Denny wrote that the native nations were “an enemy brought up from infancy to war, and perhaps superior to an equal number of the best men that could be taken against them.” He travelled to Philadelphia to deliver the official report of the loss to Secretary of War Henry Knox. Denny also compiled a dictionary of Delaware and Shawnee words. Following a 1794 mission to Fort Le Boeuf, Major Denny resigned his commission and settled near Pittsburgh.

Unlike other early pioneer towns and cities, the Commonwealth of Pennsylvania did not allow a settlement to become a “city” without first being a council (burgesses) led “borough” for a number of years. Partly because of this, Denny instead started his political career in county government serving Pittsburgh.

In 1797, Denny was elected Allegheny County Commissioner. He eventually sought even higher office and ran successfully as Treasurer for the entire county in 1803 and 1808.

Being a Revolutionary War hero, and major patriot force for the frontier front of the War of 1812, Denny ran successfully to become the first mayor of the “city” of Pittsburgh on 19 July 1816.

His term in office saw much progress in the infrastructure of the young city, improving roads and wharves. Citing failing health he retired from public life and the mayor’s office on January 14, 1817. He died 21 July 1822, and is interred at Allegheny Cemetery in the Lawrenceville neighborhood of Pittsburgh.

Ebenezer Denny married Nancy Wilkins and had children. His son, Harmar Denny, went on to establish a political career of his own: a member of the Pennsylvania State House of Representatives from 1824 to 1829, as well as being elected to the Twenty-first Congress through the Twenty-fourth Congress serving from 15 December 1829, to 3 March 1837.

His second great-grandson, Harmar D. Denny, Jr., served in the 82nd Congress in the U.S. House of Representatives from Pennsylvania’s 29th congressional district.

One of the first resolutions of the Pittsburgh City Council was that of honoring the patriotic and public service of Ebenezer Denny on learning of his early retirement due to health concerns in 1817. Denny Street, in the city’s Lawrenceville neighborhood, was named in his honor.