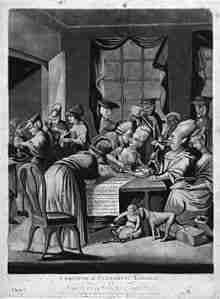 The Edenton Tea Party was a political protest in Edenton, North Carolina, in response to the Tea Act, passed by the British Parliament in 1773. Inspired by the Boston Tea Party and the calls for tea boycotts and the resolutions of the first North Carolina Provincial Congress, 51 women, led by Penelope Barker, met on October 25, 1774, and signed a statement of protest vowing to give up tea and boycott other British products “until such time that all acts which tend to enslave our Native country shall be repealed.”

The Edenton Tea Party was a landmark, not because of the stances taken—boycotts were common across the Thirteen Colonies—but because it was organized by women. At the time, women were very much absent in politics and the Tea Party was one of the first instances of political action by women. Despite their usual absence at political gatherings, women played a significant role in the running of the household and were therefore crucial to boycott efforts instigated by men. Barker believed that action by women would be noteworthy in England and sent a copy of the declaration to the British press. She said at the time “Maybe it has only been men who have protested the king up to now. That only means we women have taken too long to let our voices be heard. We are signing our names to a document, not hiding ourselves behind costumes like the men in Boston did at their tea party. The British will know who we are.” While the reaction in England was mostly derogatory and dismissive (i.e. engraver Philip Dawe’s satirical depiction of the event), because the signatories were women, in the colonies it inspired many other women to take up the boycotts and their actions were praised by many patriots.The Edenton tea party had 50 women or 51 including Penelope Barker. The Signers of the Declaration include: Abagail Charlton, Mary Blount, F. Johnstone, Elizabeth Creacy, Margaret Cathcart,Elizabeth Patterson, Anne Johnstone, Jane Wellwood, Margaret Pearson, Mary Woolard, Penelope Dawson, Sarah Beasley, Jean Blair, Susannah Vail, Grace Clayton, Elizabeth Vail, Frances Hall, Mary Jones, Mary Creacy, Anne Hall, Mary Creacy, Rebecca Bondfield, Ruth Benbury, Sarah Littlejohn, Sarah Howcott, Penelope Barker, Sarah Hoskins, Elizabeth P. Ormond, Mary Littledle, M. Payne, Sarah Valentine, Elizabeth Johnston, Elizabeth Crickett, Mary Bonner, Elizabeth Green, Lydia Bonner, Mary Ramsay, Sarah Howe, Anne Horniblow, Lydia Bennet, Mary Hunter, Marion Wells, Tresia Cunningham, Anne Anderson, Elizabeth Roberts, Sarah Mathews, Elizabeth Roberts, Anne Haughton, Elizabeth Roberts, Elizabeth Beasly

Unlike many famous documents from the American Revolution, the petition signed at the Edenton Tea Party survives only through British accounts. The text of the petition, and the list of signers, was printed in the Morning Chronicle and London Advertiser on January 16, 1775.