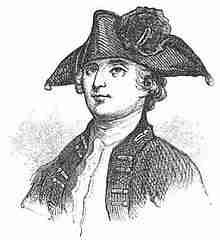 Edmund Fanning (April 24, 1739 – February 28, 1818) was a British North American colonial administrator and military leader. Born in New York, he became a lawyer and politician in North Carolina in the 1760s. He first came to fame as the focus of hatred of the Regulators, and led anti-Regulator militia in the War of the Regulation. When the American Revolutionary War broke out, he was driven from his home in New York, and joined the British Army, recruiting other Loyalists. He served during campaigns in New England and the South. At the end of the war in 1783 he became a United Empire Loyalist, settling in Nova Scotia.

Fanning was appointed lieutenant governor of Nova Scotia not long after his arrival, and helped oversee the resettlement of other Loyalist refugees in the province. In 1786 he was appointed lieutenant governor of Saint John’s Island, which was renamed Prince Edward Island during his tenure. He served in that post until 1813. He retired to London, where he died in 1818.

Edmund Fanning was born in the Town of Southold on Long Island in the colony of New York to Captain James Fanning and Hannah Smith. Nova Scotia Governor John Parr believed Fanning was, like Parr, a Protestant Irishman, and was from Ulster and owned great estates there.

He graduated from Yale College in 1757 and studied law in New York. He then moved to the Province of North Carolina in 1761 and settled in Hillsborough. He held several local political posts and became a protégé of colonial governor William Tryon. Fanning came into conflict with the leaders of the Regulator movement. He, along with lawyer Francis Nash, was charged with extorting money from the local residents, but was fined only a small fine. After several riots, the movement was crushed by the an army of North Carolina militia led by Tryon at the Battle of Alamance on May 16, 1771.

Fanning followed Tryon to New York as his personal secretary. At the start of the American Revolutionary War, revolutionaries drove Fanning from his home, forcing him to seek refuge aboard {HMS|Asia|1764|6} in the New York harbor. After being commissioned a colonel by General William Howe, Fanning raised a regiment of Loyalists named the King’s American Regiment. He was wounded twice during the war and was credited with saving Yale from destruction by British forces during a destructive raid against New Haven led by Tryon. Fanning was granted an honorary law degree in 1803 as thanks for this action. He was later appointed to the office of surveyor general, which he retained until he fled, with other Loyalists, to Nova Scotia in 1783.

Fanning became lieutenant-governor of Nova Scotia in that same year, serving as deputy to Governor John Parr. On November 30, 1785 he married Phebe Maria Burns. In 1786, he was appointed lieutenant governor of St. John’s Island (which was later renamed Prince Edward Island) by the Home Secretary, Thomas Townshend, 1st Viscount Sydney, a post which he held for almost 19 years, resigning in 1805. Prince Edward Island’s Government House, the official residence of the lieutenant governor, is often referred to as “Fanningbank” on the island, though Fanning never dwelt there. He was promoted to general of the British Army in 1808. He retired to London in 1813 and died there in 1818.

Despite having several children, Fanning had no grandchildren. He had two daughters, Lady Wood, who lived near London with her mother; the other daughter married a Captain Bentwick Cumberland, a nephew of Lord Bentwick, and lived in Charlotte’s Town, Prince Edward Island. He also had several prominent nephews, including the like-named explorer Edmund Fanning, the war hero Nathaniel Fanning, and the celebrated attorney John Wickham. A great nephew was James Fannin.