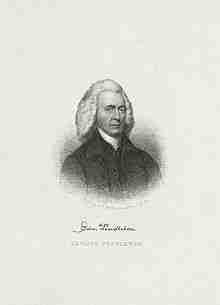 Edmund Pendleton (September 9, 1721 – October 23, 1803) was a Virginia planter, politician, lawyer and judge. He served in the Virginia legislature before and during the American Revolutionary War, rising to the position of Speaker. Pendleton attended the First Continental Congress as one of Virginia’s delegates alongside George Washington and Patrick Henry, and led the conventions both wherein Virginia declared independence (1776) and adopted the U.S. Constitution (1788). Unlike his sometime political rival Henry, Pendleton was a moderate who initially hoped for reconciliation, rather than revolt. With Thomas Jefferson and George Wythe, Pendleton revised Virginia’s legal code after the break with Britain. To contemporaries, Pendleton may have distinguished himself most as a judge, particularly in the appellate roles in which he spent his final 25 years, including leadership of what is now known as the Supreme Court of Virginia. On his death, Congress donned black armbands and passed a resolution expressing “their regret that another star from the splendid constellation of virtue and talents which guided the people of the United States in their struggle for independence.”

Pendleton was born in Caroline County to Mary Bishop Taylor, whose young husband (and father of her six other children), Henry Pendleton, had died four months earlier. Pendleton’s maternal grandfather, James Taylor, was a large landowner in nearby Rappahannock County, and may have helped raise the children until the widow remarried Edward Watkins two years later. When Edmund was 14 years old, he became apprenticed to Benjamin Robinson, Clerk of the Caroline County Court, which is where he learned about political issues and soon began reading law books and learning legal procedures. In 1737, Pendleton was made clerk of the vestry of St. Mary’s Parish in Caroline, which not only secured him a steady (though small) income, but also began his involvement with practical church-related matters which would continue throughout his life.

Edmund Pendleton received a license to practice law in April 1741. His success before nearby county courts, including as the prosecuting attorney for Essex County allowed Pendleton to become a member of the General Court bar in October 1745. When attorneys were forbidden to practice before both courts, Pendleton chose the General Court, and wrapped up his lower court practice–which allowed him to accept appointment as a Justice of the Peace for Caroline County in 1751. Pendleton also trained many young lawyers, including his nephews John Penn (later one of the signers of the Declaration of Independence) and John Taylor of Caroline (who became a U.S. Senator).

From 1752-1776 Pendleton represented Caroline County in the House of Burgesses. In May 1766, his mentor, the powerful speaker John Robinson died, and Pendleton was appointed one of the executors, thus becoming involved in the John Robinson Estate Scandal throughout the rest of his legal career.

Pendleton was on the Virginia Committee of Correspondence in 1773 and was a delegate to Continental Congress from Virginia in 1774. A moderate among the revolutionaries, in a resolution at the Second Congress, he said: “The ground and foundation of the present unhappy dispute between the British Ministry and Parliament and America, is a Right claimed by the former to tax the Subjects of the latter without their consent, and not an inclination on our part to set up for independency, which we utterly disavow and wish to restore to a Constitutional Connection upon the most solid and reasonable basis.”

Pendleton served as President of the Virginia Committee of Safety from August 16, 1775 to July 5, 1776 (effectively serving as governor of the colony) and as President of the Virginia Convention which authorized Virginia’s delegates to propose a resolution to move for the break from Britain and creation of the Declaration of Independence. The Convention debated the Virginia Declaration of Rights, drafted by George Mason and which served as a model for the Declaration of Independence. Pendleton proposed the modification in the statement of universal rights in Virginia’s declaration to exclude slaves, thus winning support of slave owners.

Fellow delegates elected Pendleton the first Speaker of Virginia’s new House of Delegates although a fall from a horse in March 1777 dislocated his hip and caused him to miss the first session. He used crutches the rest of his life. Pendleton, along with Thomas Jefferson and George Wythe, revised Virginia’s law code. He became Judge of the High Court of Chancery in 1777. When Virginia created a Supreme Court of Appeals in 1778, Pendleton was appointed its first president, and served until his death. In 1788 delegates unanimously selected Pendleton president of the Virginia Ratifying Convention. When George Wythe took the chair, Pendleton addressing colleagues thus: “…the people by us are peaceably assembled, to contemplate in the calm lights of mild philosophy, what Government is best calculated to promote their happiness, and secure their liberty. This I am sure we shall effect, if we do not lose sight of them by too much attachment to pictures of beauty, or horror, in our researches into antiquity, our travels for examples into remote regions…”

Edmund Pendleton married twice. He married Betty Roy on January 21, 1741, but she died in childbirth on November 17, 1742, and their infant son died shortly thereafter. On January 20, 1745, Pendleton married Sarah Pollard, daughter of Joseph Pollard and Priscilla Hoomes. Edmund and Sarah had no children, but in his extensive correspondence with contemporaries, he often referred to their marriage as happy.

Since Pendleton had no direct descendants, his nieces, nephews, grandnieces and grandnephews became his heirs. Pendleton did not grant freedom to any slaves in his will, unlike George Washington who similarly died without direct descendants, and George Wythe who freed all his slaves in his lifetime. His brother John Pendleton’s son, also named Edmund Pendleton (1743-1827), added “Jr.” to distinguish himself from the judge whose principal heir he became. His oldest brother, James Pendleton, 19 years his senior, died in 1762 and left a large estate in Culpeper that Edmund administered for the widow and four children.

Judge Pendleton, after lying in state in Richmond, was buried at his home, Edmundsbury, in Caroline County. Due to the ravages of time upon the estate’s buildings, his body was removed circa 1907 to Bruton Parish Church in what became Colonial Williamsburg. A memorial to the distinguished legislator and jurist still exists near the former estate.

Mr. Eustis rose and observed that within a few days past the House were called upon to take notice of an event which perhaps would be more interesting to posterity than to the present generation; the death of one of those illustrious patriots who, by a life devoted to his country, had bequeathed a name and an example to posterity which he would not attempt to describe. He had information that another of these sages, Edmund Pendleton, of Virginia, had paid the last tribute to nature.

On this occasion he begged leave to offer to the house the following resolution:

Resolved, That this House, impressed with a lively sense of the important services rendered to his country by Edmund Pendleton, deceased, will wear a badge of mourning for thirty days, as an emblem of their veneration for his illustrious character, and of their regret that another star is fallen from the splendid constellation of virtue and talents which guided the people of the United States in their struggle for independence.

The resolution was immediately taken up and agreed to – Ayes 77, Nayes 0

Thomas Jefferson said of Pendleton: “Taken in all he was the ablest man in debate I ever met”.