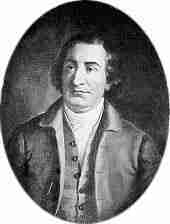 Randolph was born on August 10, 1753 to the influential Randolph family in Williamsburg, Virginia. He was educated at the College of William and Mary. After graduation he began reading law with his father John Randolph and uncle, Peyton Randolph. In 1775, with the start of the American Revolution, Randolph’s father remained a Loyalist and returned to Britain; Edmund Randolph remained in America where he joined the Continental Army as aide-de-camp to General George Washington.

Upon the death of his uncle Peyton Randolph in October 1775, Randolph returned to Virginia to act as executor of the estate, and while there was elected as a representative to the Virginia Convention. He would go on to serve as mayor of Williamsburg, and then as the first Attorney General of the United States under the newly formed government. He was married on August 29, 1776 to Elizabeth Nicholas (daughter of Robert C. Nicholas), and had a total of six children, including Peyton Randolph, Governor of Virginia from 1811 to 1812.

Randolph, who suffered from paralysis, died at age 60 on September 12, 1813, while visiting the home of a friend, Nathaniel Burwell of Carter Hall, near Millwood, Virginia, in Clarke County; he is buried at a nearby Burwell family cemetery “Old Chapel”.

Randolph was selected as one of eleven delegates to represent Virginia at the Continental Congress in 1779, and served as a delegate through 1782. During this period he also remained in private law practice, handling numerous legal issues for George Washington among others.

Randolph was elected Governor of Virginia in 1786, that same year leading a delegation to the Annapolis Convention.

The following year, as a delegate from Virginia to the Constitutional Convention, Randolph introduced the Virginia Plan as an outline for a new national government. He argued against importation of slaves and in favor of a strong central government, advocating a plan for three chief executives from various parts of the country. The Virginia Plan also proposed two houses, where in both of them delegates were chosen based on state population. Randolph additionally proposed, and was supported by unanimous approval by the Convention’s delegates, “that a Nationally Judiciary be established” (Article III of the constitution established the federal court system). The Articles of Confederation lacked a national court system for the United States.

Randolph was also a member of the “Committee of Detail” which was tasked with converting the Virginia Plan’s 15 resolutions into a first draft of the Constitution. Randolph refused to sign the final document, however, believing it had insufficient checks and balances, and published an account of his objections in October 1787. He nevertheless reversed his position at the Virginia Ratifying Convention in 1788 and voted for ratification of the Constitution because eight other states had already done so, and he did not want to see Virginia left out of the new national government.

Randolph was appointed as the first U.S. Attorney General in September 1789, maintaining precarious neutrality in the feud between Thomas Jefferson (of whom Randolph was a second cousin) and Alexander Hamilton. When Jefferson resigned as Secretary of State in 1793, Randolph succeeded him to the position. The major diplomatic initiative of his term was the Jay Treaty with Britain in 1794, but it was Hamilton who devised the plan and wrote the instructions, leaving Randolph the nominal role of signing the papers. Randolph was hostile to the resulting treaty, and almost gained Washington’s ear. Near the end of his term as Secretary of State, negotiations for Pinckney’s Treaty were finalized.

A scandal involving an intercepted French message led to Randolph’s resignation as Secretary of State in August, 1795. The British Navy had intercepted correspondence from the French minister, Joseph Fauchet, to the U.S. and turned it over to Washington. Washington was dismayed that the letters reflected contempt for the United States and that Randolph was primarily responsible. The letters implied that Randolph had exposed the inner debates in the cabinet to the French and told them that the Administration was hostile to France. At the very least, Elkins and McKitrick conclude, there “was something here profoundly disreputable to the government’s good faith and character.” Washington immediately overruled Randolph’s negative advice regarding the Jay Treaty. A few days later Washington, in the presence of the entire cabinet, handed the minister’s letter to Randolph and demanded he explain it. Randolph was speechless and immediately resigned. Chernow and Elkins conclude that Randolph was not bribed by the French but “was rather a pitiable figure, possessed of some talents and surprisingly little malice, but subject to self-absorbed silliness and lapses of good sense.” However, Randolph’s own published Vindication illustrates his concerns regarding both public and private perceptions of his character, concerns which held great value in the 18th century.

After leaving the cabinet he returned to Virginia to practice law; in his most famous case he was defense counsel at Aaron Burr’s trial for treason in 1807.