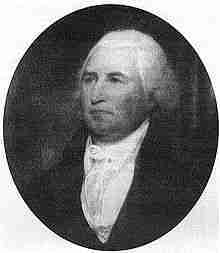 Edward Bancroft (9 January 1744 – 8 September 1821) was an American physician and double-agent spy during the American Revolution.

Bancroft worked as a spy for Benjamin Franklin in Britain before the Revolution, and while serving as secretary to the American Commission in Paris. During the latter period, he was also a spy for Britain, reporting on dealings between France and the United States.

Bancroft was born on 9 January 1744 in Westfield, Massachusetts. His father died of an epileptic seizure when Bancroft was only two years old, and his mother had to support the family alone. His mother remarried five years later, and they moved to Connecticut to live with his stepfather, David Bull.

In Connecticut, Bancroft studied under Silas Deane, a schoolmaster who later became an important politician and diplomat. At the age of sixteen, Bancroft was apprenticed to a physician in Killingworth, Connecticut, but ran away after a few years. Many years later, Bancroft returned and repaid his debt to his former master.

On 14 July 1763, Bancroft departed the colonies for British Guiana, where he became a doctor on a plantation. He soon expanded his practice to multiple plantations and wrote a study of the local environment. His discovery that the torpedo fish discharged electricity is notable. Bancroft grew tired of South America and left in 1766. He spent a year traveling between North America and South America before leaving for London.

In London, Bancroft studied medicine at St. Bartholomew’s Hospital. During this period, he also published a book entitled Natural History of Guiana (1769). This book attracted the attention of Paul Wentworth, New Hampshire’s colonial agent in London. He hired Bancroft to survey Wentworth’s plantation in Surinam and make recommendations for more efficient operation. Bancroft spent two months in Surinam at Wentworth’s plantation before returning to London. He was elected a fellow of the Royal Society in 1773 as ” a gentleman versed in natural history and Chymistry, and author of the natural history of Guiana”

Bancroft was employed to gather information from British political and military sources for Franklin. It’s not clear whether Bancroft continued spying after Franklin left London in 1774. Most agree, nonetheless, that Bancroft maintained his position as an agent for the colonies. When the Committee of Secret Correspondence sent Silas Deane (Bancroft’s former teacher) to France in 1776, Franklin wrote Deane telling him to contact Bancroft. This suggests that Franklin believed that Bancroft would be a source of useful information for Deane.

Deane arrived in France on 7 June 1776; the next day he wrote Bancroft, asking him to come to Paris. In the letter, Deane said they would discuss procuring goods for trading with the Indians, and enclosed thirty pounds (a generous amount) for travel expenses. Bancroft met with Deane on 8 June, and learned that Deane’s purpose in France was to win French aid for the Americans against Britain. While Bancroft declined the invitation to attend negotiations, he did serve as Deane’s assistant and interpreter. Deane’s negotiations resulted in France sending some supplies to the Americans.

Deane told Bancroft that American leaders hoped to embroil Britain in a war against other foes (specifically, an alliance of France and Prussia), which they hoped would distract Britain. Though Deane and other Americans thought France would form the alliance, this ploy came to nothing. But it greatly troubled Bancroft. On 26 July 1776, Bancroft returned to London. Before leaving France, he assured Deane that he would spy for the colonies in Britain.

==Spying for the British==

Though Bancroft had worked for Franklin and Deane, he was not a great enthusiast for American independence, and the possibility of a French war against Britain alarmed him. Despite his promise to Deane, he had reservations about doing anything that might promote a rift between Britain and the American colonies.

In London he met Paul Wentworth, recently recruited by the British Secret Service. Wentworth arranged for Bancroft to meet Secret Service chief William Eden and Lords Suffolk and Weymouth. Bancroft agreed to be a double agent for Britain.

Soon after this, Franklin arrived to take over the negotiations with France. Bancroft was ordered to associate himself with Franklin. Fortuitously, Franklin appointed Bancroft as secretary to the American Commission in Paris. For his spying, the British promised Bancroft a pension of 200 pounds. (This amount was later increased to 500 and then 1,000 pounds.)

Bancroft reported under the cover of weekly letters to “Mr. Richards”, signed “Edward Edward”, about “gallantry” (the writer’s exploits with ladies). But between the lines of the cover text, Bancroft wrote his reports in a special ink. Every Tuesday, he put the letter in a bottle, tied a string around the bottle, and left the bottle in a hole in a certain box tree in Paris, after 9:30 PM. A British official retrieved the message and replaced it with new orders. Bancroft return later that night to recover his bottle. It is said that, through this method, George III saw the French-American Treaty of Alliance just two days after it was signed. In addition, Bancroft was often sent on spying missions to London by Franklin and Deane, so he was able to report directly to Lord Suffolk and others.

There is some debate as to whether Franklin knew that Bancroft was a British spy. Franklin wrote that even though he suspected one associate of being a British spy, as long as he (Franklin) did not provide the suspect with any private information, there was nothing to worry about, and the spy need not be dismissed. Even if Franklin did discover Bancroft’s true loyalty, he never revealed it explicitly in any of his extant writings. Regardless, Bancroft was successful but ineffective; that is, he certainly gathered a good deal of information, but the British did not prevent the French-American alliance.

==Life after the Revolutionary War==

At the end of the Revolutionary War, Bancroft obtained patents giving him the right to import chinkapin (yellow) oak bark into Britain and France. He became wealthy from this trade. In 1794, Bancroft published Experimental Researches Concerning Permanent Colors, a book he updated in 1813. He was elected a Foreign Honorary Member of the American Academy of Arts and Sciences in 1797.

Bancroft’s activity as a double agent remained hidden until 1891, when British diplomatic papers were disclosed to the public.