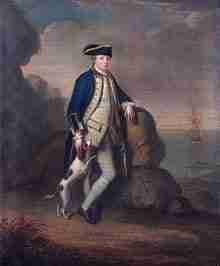 Pakenham was the son of Thomas Pakenham, 1st Baron Longford and Elizabeth Cuffe, 1st Countess of Longford. Longford joined the Royal Navy at the age of sixteen. He served during the Seven Years War taking part in naval engagements off the coasts of West Africa and North America. He was captured by the Spanish near the end of the war and held for over a year. After he returned home following the Treaty of Paris he briefly represented County Longford in the Irish House of Commons between 1765 and 1766. In 1776 he inherited his father’s title and seat in the Irish House of Lords. In January 1778 he returned to active service during the American War of Independence, serving in the English Channel and Mediterranean Sea. He returned home in 1782 having earned around £5,000 in prize money.

Lord Langford married Catherine Rowley, daughter of Hercules Langford Rowley, in 1768. They had a number of children including General Sir Edward Pakenham. Their daughter Catherine married the Duke of Wellington. He was the owner of Pakenham Hall Castle in County Westmeath which he systematically improved during his lifetime. Langford died in June 1792, aged 49, and was succeeded in the barony by his eldest son Thomas, who in 1794 also succeeded his grandmother in the earldom of Longford.{citation needed|date=December 2013} His third son was Sir Hercules Robert Pakenham CB, KCB, a lieutenant-general of the British Army and was brevet colonel and aide-de-camp to the William IV of the United Kingdom.