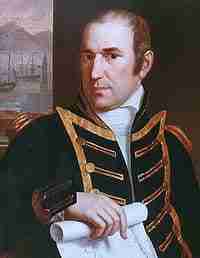 Edward Preble (15 August 1761 – 25 August 1807) was a United States naval officer who served with great distinction during the 1st Barbary War, leading American attacks on the city of Tripoli and forming the officer corps that would later lead the U.S. Navy in the War of 1812.

Preble was born at Falmouth, Eastern Massachusetts, now Portland, Maine, 15 August 1761, the son of General Jedediah Preble. As a boy, his home was destroyed in the burning of Falmouth by British Naval Commander Henry Mowatt. It is said that this action compelled Preble to join the Navy. It also contributed to his terrible temper later in life. In 1779 he was appointed to the Massachusetts State Navy, becoming an officer in the 26 gun ship Protector. Becoming a British prisoner when that ship was captured in 1781, he was held for a time in the infamous prison ship Jersey. On his release, he served in the Massachusetts Navy sloop Winthrop and led a boarding party to cut out a British brig at Castine, Maine. At the opening of this action, the Winthrop passed by the enemy ship so quickly that only Preble and 14 of his 45-man boarding party managed to get aboard. As Winthrop came back around to make another pass, Winthrop’s captain, George Little, asked Preble if he wanted more men. Preble, realizing that he would lose the element of surprise if he disclosed his far weaker position, coolly replied, “No. We have more than we want. We stand in each others’ way!” Going below with pistols in hand, he caught a portion of the crew still in their hammocks. Preble then announced that all were prisoners and that any resistance would be in vain. As British soldiers on shore began firing, Preble worked his prize out to sea while the Winthrop turned to deliver a broadside in reply before making her escape.

Fifteen years of merchant service followed his Revolutionary War career and, in April 1798, he was commissioned as a lieutenant in the United States Navy. In January 1799, he assumed command of the 14 gun brig Pickering and took her to the West Indies to protect American commerce during the Quasi-War with France. Commissioned as a captain in June of 1799, he took command of the 32 gun frigate Essex in December and sailed from Newport, Rhode Island in January 1800 for the Pacific to convoy home a group of East Indiamen.

Upon his return, Preble announced to the Secretary of the Navy that he intended to retire from the Navy due to his health. Not wanting to lose such an experienced and capable officer, the secretary decided to put Preble on indefinite sick leave until a good post could be found for him.

During this time, the United States was engaged in naval warfare with the city-state of Tripoli, whose corsairs were causing havoc amongst American merchantmen in the Mediterranean. The U.S. Navy had sent squadrons under two commanders, Richard Dale and Richard Valentine Morris, to protect American interests in the region. While Dale ran an effective blockade of Tripoli, the endless routine bored his officers. Upon his return, Dale left the Navy over a promotion dispute. The tenure of Richard Valentine Morris, on the other hand, was an utter fiasco, as Morris was neither an effective commander nor a very smart one. Morris spent most of his time socializing in Gibraltar and Malta, and he managed to be taken hostage by the Bey of Tunis, who felt that the American did not give him an adequate farewell (the ransom was paid by the American and Danish consuls). When he finally did arrive at Tripoli, he tried to play diplomat and sue for peace, which destabilized the strong negotiating position the Americans had been building up to that point. When Morris returned home, he was stripped of his commission by President Thomas Jefferson without so much as a court-martial.

With Morris ordered home, President Jefferson needed a new officer to command the Mediterranean Squadron. Bypassing several senior officers, Preble was asked to travel to Boston and ready USS Constitution for duty in the Mediterranean. He accepted, and was given a promotion to Commodore along with his new ship. He sailed on August 14, 1803.

On September 10, Constitution was approaching Cadiz on a black, moonless night. Suddenly, the dim silhouette of a warship loomed out of the hazy darkness close aboard. Preble immediately ordered Constitution cleared for action. Taking his speaking trumpet, he asked the stranger, “What ship is that?”

The unknown ship returned the question, to which Preble responded, “This is the United States frigate Constitution. What ship is that?”

The other ship then asked again, “What ship is that?”

Preble identified himself again with “This is the United States frigate Constitution. What ship is that?”

“What ship is that?”

Preble, whose roaring temper had a very short fuse, then told the other ship to stop playing games in no uncertain terms: “I am now going to hail you for the last time. If a proper answer is not returned, I will fire a shot into you.”

“If you fire a shot, I’ll return a broadside,” replied an Englishman on the other ship.

Preble demanded, “What ship is that?”

“This is His Britannic Majesty’s 74-gun ship of the line Donegal, Sir Richard Strachan commanding. Heave to and send a boat.”

Simply put, an 74 would crush a mere frigate within a broadside or two. Surely the “old man” would have to back down.

But the Commodore wasn’t having any of it. Leaping up to the mizzen shrouds, Preble roared, “This is the United States Ship Constitution, 44 guns, Edward Preble, an American Commodore, who will be damned before he sends his boat on board any vessel!” As he turned, staring flinty-eyed down the spar deck at the spluttering slow-burning fuses held by the gunners, he told his men, “Blow your matches, boys!”

A few minutes later, a British lieutenant came aboard from the other ship. He told Preble that the ship he had been arguing with wasn’t the 74-gun ship of the line that the British had claimed; rather it was the 32-gun frigate Maidstone. Nevertheless, the story that Commodore Preble stood up to a British ship of the line was galvanizing, and it spread quickly throughout the Mediterranean.

While commanding in Tripoli, Preble masterminded the burning of the USS Philadelphia by Lieutenant Stephen Decatur on February 16, 1804, preventing the captured frigate from falling into enemy hands. Had Tripoli gained the use of the Philadelphia, the entire blockade would have been wasted. Stephen Decatur and his younger brother, James Decatur, led the actual operation.

James Decatur was killed in the fighting later that year aboard one of the squadron’s attack craft.

Over the course of his career, Preble helped establish many of the modern Navy’s rules and regulations. Described as a stern taskmaster, he kept high discipline upon the ships under his command. He also dictated that his ships be kept in a state of readiness for any action while under sail, something many US naval officers at the time did not insist upon. Future sea captains such as Decatur, Lawrence, and Porter took his procedures to heart at a time when the US Navy was highly unregulated. Many of Preble’s procedures became doctrine after the establishment of an official US Navy. The officers serving under him during his career also went on to become influential in the Navy Department after his death, and together they proudly wore the unofficial title of “Preble’s Boys”. (When Preble took over command he discovered that his oldest officer was 30 and the youngest 15 years old. He therefore grumbled the Secretary of the Navy had given him “just a pack of schoolboys”.)

Preble’s Mediterranean cruise led directly to the US government’s firm anti-negotiation stance. Many Mediterranean states, including Tripoli, had been pirating American shipping vessels, ransoming the sailors, and demanding tribute to prevent future pirate attacks. The tribute rose after each successful payment, as did the brutality and boldness of the attacks.

In September 1804, Commodore Preble requested relief due to a long time illness. He returned to the United States in February 1805 and became engaged in the comparably light duty of shipbuilding activities at Portland, Maine. By Congressional resolution in March, 1805, a gold medal was struck and presented to Commodore Preble for the “gallantry and good conduct” of himself and his squadron at Tripoli. President Jefferson offered him the Navy Department in 1806, but Preble declined appointment due to his poor health. He died in Portland of a gastrointestinal illness on 25 August 1807. He is buried in Eastern Cemetery, Portland, Maine.

Preble appears as a character in the science fiction novel Time for Patriots, ISBN 978-1-60693-224-7, performing much as he did historically.